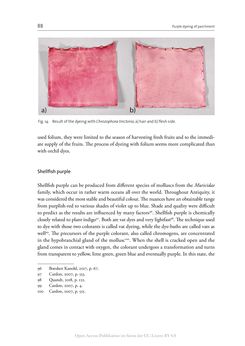 88 Purple dyeing of parchment used folium, they were limited to the season of harvesting fresh fruits and to the immedi- ate supply of the fruits. The process of dyeing with folium seems more complicated than with orchil dyes. Shellfish purple Shellfish purple can be produced from different species of molluscs from the Muricidae family, which occur in rather warm oceans all over the world. Throughout Antiquity, it was considered the most stable and beautiful colour. The nuances have an obtainable range from purplish-red to various shades of violet up to blue. Shade and quality were difficult to predict as the results are influenced by many factors96. Shellfish purple is chemically closely related to plant indigo97. Both are vat dyes and very lightfast98. The technique used to dye with those two colorants is called vat dyeing, while the dye-baths are called vats as well99. The precursors of the purple colorant, also called chromogens, are concentrated in the hypobranchial gland of the mollusc100. When the shell is cracked open and the gland comes in contact with oxygen, the colorant undergoes a transformation and turns from transparent to yellow, lime green, green blue and eventually purple. In this state, the 96 Boesken Kanold, 2017, p. 67. 97 Cardon, 2007, p. 553. 98 Quandt, 2018, p. 122. 99 Cardon, 2007, p. 4. 100 Cardon, 2007, p. 555. Fig. 14: Result of the dyeing with Chrozophora tinctoria; a) hair and b) flesh side. Open-Access-Publikation im Sinne der CC-Lizenz BY 4.0
back to the  book The Vienna Genesis - Material analysis and conservation of a Late Antique illuminated manuscript on purple parchment"
The Vienna Genesis Material analysis and conservation of a Late Antique illuminated manuscript on purple parchment