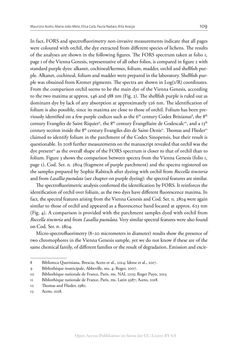 Maurizio Aceto, Maria João Melo, Elisa Calà, Paula Nabais, Rita Araújo 109 In fact, FORS and spectrofluorimetry non-invasive measurements indicate that all pages were coloured with orchil, the dye extracted from different species of lichens. The results of the analyses are shown in the following figures. The FORS spectrum taken at folio 1, page 1 of the Vienna Genesis, representative of all other folios, is compared in figure 2 with standard purple dyes: alkanet, cochineal/kermes, folium, madder, orchil and shellfish pur- ple. Alkanet, cochineal, folium and madder were prepared in the laboratory. Shellfish pur- ple was obtained from Kremer pigments. The spectra are shown in Log(1/R) coordinates. From the comparison orchil seems to be the main dye of the Vienna Genesis, according to the two maxima at approx. 546 and 588 nm (Fig. 2). The shellfish purple is ruled out as dominant dye by lack of any absorption at approximately 526 nm. The identification of folium is also possible, since its maxima are close to those of orchil. Folium has been pre- viously identified on a few purple codices such as the 6th century Codex Brixianus8, the 8th century Evangiles de Saint Riquier9, the 8th century Évangéliaire de Godescalc10, and a 13th century section inside the 8th century Evangiles dits de Saint-Denis11. Thomas and Flieder12 claimed to identify folium in the parchment of the Codex Sinopensis, but their result is questionable. In 2018 further measurements on the manuscript revealed that orchil was the dye present13 as the overall shape of the FORS spectrum is closer to that of orchil than to folium. Figure 3 shows the comparison between spectra from the Vienna Genesis (folio 1, page 1), Cod. Ser. n. 2804 (fragment of purple parchment) and the spectra registered on the samples prepared by Sophie Rabitsch after dyeing with orchil from Roccella tinctoria and from Lasallia pustulata (see chapter on purple dyeing): the spectral features are similar. The spectrofluorimetric analysis confirmed the identification by FORS. It reinforces the identification of orchil over folium, as the two dyes have different fluorescence maxima. In fact, the spectral features arising from the Vienna Genesis and Cod. Ser. n. 2804 were again similar to those of orchil and appeared as a fluorescence band located at approx. 623 nm (Fig. 4). A comparison is provided with the parchment samples dyed with orchil from Roccella tinctoria and from Lasallia pustulata. Very similar spectral features were also found on Cod. Ser. n. 2804. Micro-spectrofluorimetry (8–20 micrometers in diameter) results show the presence of two chromophores in the Vienna Genesis sample, yet we do not know if these are of the same chemical family, of different families or the result of degradation. Emission and excit- 8 Biblioteca Queriniana, Brescia; Aceto et al., 2014; Idone et al., 2017. 9 Bibliothèque municipale, Abbeville, ms. 4; Roger, 2007. 10 Bibliothèque nationale de France, Paris, ms. NAL 1203; Roger Puyo, 2013. 11 Bibliothèque nationale de France, Paris, ms. Latin 9387; Aceto, 2018. 12 Thomas and Flieder, 1980. 13 Aceto, 2018. Open-Access-Publikation im Sinne der CC-Lizenz BY 4.0
back to the  book The Vienna Genesis - Material analysis and conservation of a Late Antique illuminated manuscript on purple parchment"
The Vienna Genesis Material analysis and conservation of a Late Antique illuminated manuscript on purple parchment