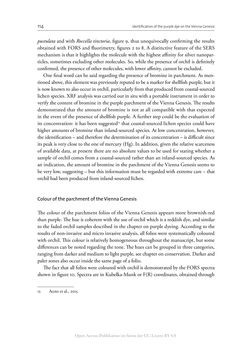 114 Identification of the purple dye on the Vienna Genesis pustulata and with Roccella tinctoria, figure 9, thus unequivocally confirming the results obtained with FORS and fluorimetry, figures 2 to 8. A distinctive feature of the SERS mechanism is that it highlights the molecule with the highest affinity for silver nanopar- ticles, sometimes excluding other molecules. So, while the presence of orchil is definitely confirmed, the presence of other molecules, with lower affinity, cannot be excluded. One final word can be said regarding the presence of bromine in parchment. As men- tioned above, this element was previously reputed to be a marker for shellfish purple, but it is now known to also occur in orchil, particularly from that produced from coastal-sourced lichen species. XRF analysis was carried out in situ with a portable instrument in order to verify the content of bromine in the purple parchment of the Vienna Genesis. The results demonstrated that the amount of bromine is not at all compatible with that expected in the event of the presence of shellfish purple. A further step could be the evaluation of its concentration: it has been suggested15 that coastal-sourced lichen species could have higher amounts of bromine than inland-sourced species. At low concentration, however, the identification – and therefore the determination of its concentration – is difficult since its peak is very close to the one of mercury (Hg). In addition, given the relative scarceness of available data, at present there are no absolute values to be used for stating whether a sample of orchil comes from a coastal-sourced rather than an inland-sourced species. As an indication, the amount of bromine in the parchment of the Vienna Genesis seems to be very low, suggesting – but this information must be regarded with extreme care – that orchil had been produced from inland-sourced lichen. Colour of the parchment of the Vienna Genesis The colour of the parchment folios of the Vienna Genesis appears more brownish-red than purple. The hue is coherent with the use of orchil which is a reddish dye, and similar to the faded orchil samples described in the chapter on purple dyeing. According to the results of non-invasive and micro invasive analysis, all folios were systematically coloured with orchil. This colour is relatively homogeneous throughout the manuscript, but some differences can be noted regarding the tone. The hues can be grouped in three categories, ranging from darker and medium to light purple, see chapter on conservation. Darker and paler zones also occur inside the same page of a folio. The fact that all folios were coloured with orchil is demonstrated by the FORS spectra shown in figure 10. Spectra are in Kubelka-Munk or F(R) coordinates, obtained through 15 Aceto et al., 2015. Open-Access-Publikation im Sinne der CC-Lizenz BY 4.0
back to the  book The Vienna Genesis - Material analysis and conservation of a Late Antique illuminated manuscript on purple parchment"
The Vienna Genesis Material analysis and conservation of a Late Antique illuminated manuscript on purple parchment