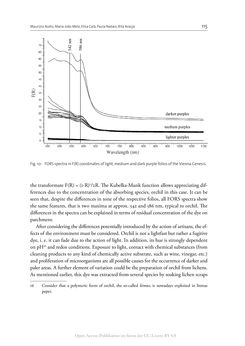 Maurizio Aceto, Maria João Melo, Elisa Calà, Paula Nabais, Rita Araújo 115 the transformate F(R) = (1-R)2/2R. The Kubelka-Munk function allows appreciating dif- ferences due to the concentration of the absorbing species, orchil in this case. It can be seen that, despite the differences in tone of the respective folios, all FORS spectra show the same features, that is two maxima at approx. 542 and 586 nm, typical to orchil. The differences in the spectra can be explained in terms of residual concentration of the dye on parchment. After considering the differences potentially introduced by the action of artisans, the ef- fects of the environment must be considered. Orchil is not a lightfast but rather a fugitive dye, i. e. it can fade due to the action of light. In addition, its hue is strongly dependent on pH16 and redox conditions. Exposure to light, contact with chemical substances (from cleaning products to any kind of chemically active substrate, such as wine, vinegar, etc.) and proliferation of microorganisms are all possible causes for the occurrence of darker and paler areas. A further element of variation could be the preparation of orchil from lichens. As mentioned earlier, this dye was extracted from several species by soaking lichen scraps 16 Consider that a polymeric form of orchil, the so-called litmus, is nowadays exploited in litmus paper. Fig. 10: FORS spectra in F(R) coordinates of light, medium and dark purple folios of the Vienna Genesis. Open-Access-Publikation im Sinne der CC-Lizenz BY 4.0
back to the  book The Vienna Genesis - Material analysis and conservation of a Late Antique illuminated manuscript on purple parchment"
The Vienna Genesis Material analysis and conservation of a Late Antique illuminated manuscript on purple parchment