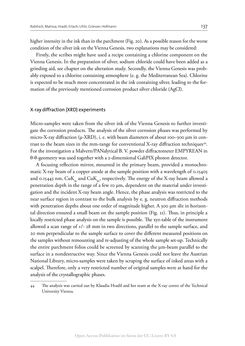 Rabitsch, Malissa, Hradil, Erlach, Uhlir, Griesser, Hofmann 137 higher intensity in the ink than in the parchment (Fig. 20). As a possible reason for the worse condition of the silver ink on the Vienna Genesis, two explanations may be considered: Firstly, the scribes might have used a recipe containing a chlorine component on the Vienna Genesis. In the preparation of silver, sodium chloride could have been added as a grinding aid, see chapter on the alteration study. Secondly, the Vienna Genesis was prob- ably exposed to a chlorine containing atmosphere (e. g. the Mediterranean Sea). Chlorine is expected to be much more concentrated in the ink containing silver, leading to the for- mation of the previously mentioned corrosion product silver chloride (AgCl). X-ray diffraction (XRD) experiments Micro-samples were taken from the silver ink of the Vienna Genesis to further investi- gate the corrosion products. The analysis of the silver corrosion phases was performed by micro-X-ray diffraction (µ-XRD), i. e. with beam diameters of about 100–300 µm in con- trast to the beam sizes in the mm-range for conventional X-ray diffraction techniques44. For the investigation a Malvern/PANalytical B. V. powder diffractometer EMPYREAN in θ-θ-geometry was used together with a 2-dimensional GaliPIX photon detector. A focusing reflection mirror, mounted in the primary beam, provided a monochro- matic X-ray beam of a copper anode at the sample position with a wavelength of 0.15405 and 0.15443 nm, CuK α1 and CuKα2, respectively. The energy of the X-ray beam allowed a penetration depth in the range of a few 10 µm, dependent on the material under investi- gation and the incident X-ray beam angle. Hence, the phase analysis was restricted to the near surface region in contrast to the bulk analysis by e. g. neutron diffraction methods with penetration depths about one order of magnitude higher. A 300 µm slit in horizon- tal direction ensured a small beam on the sample position (Fig. 21). Thus, in principle a locally restricted phase analysis on the sample is possible. The xyz-table of the instrument allowed a scan range of +/- 28 mm in two directions, parallel to the sample surface, and 20 mm perpendicular to the sample surface to cover the different measured positions on the samples without remounting and re-adjusting of the whole sample set-up. Technically the entire parchment folios could be screened by scanning the µm-beam parallel to the surface in a nondestructive way. Since the Vienna Genesis could not leave the Austrian National Library, micro-samples were taken by scraping the surface of inked areas with a scalpel. Therefore, only a very restricted number of original samples were at hand for the analysis of the crystallographic phases. 44 The analysis was carried out by Klaudia Hradil and her team at the X-ray centre of the Technical University Vienna. Open-Access-Publikation im Sinne der CC-Lizenz BY 4.0
back to the  book The Vienna Genesis - Material analysis and conservation of a Late Antique illuminated manuscript on purple parchment"
The Vienna Genesis Material analysis and conservation of a Late Antique illuminated manuscript on purple parchment