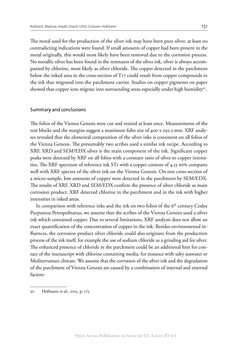 Rabitsch, Malissa, Hradil, Erlach, Uhlir, Griesser, Hofmann 151 The metal used for the production of the silver ink may have been pure silver, at least no contradicting indications were found. If small amounts of copper had been present in the metal originally, this would most likely have been removed due to the corrosion process. No metallic silver has been found in the remnants of the silver ink, silver is always accom- panied by chlorine, most likely as silver chloride. The copper detected in the parchment below the inked area in the cross-section of T17 could result from copper compounds in the ink that migrated into the parchment carrier. Studies on copper pigments on paper showed that copper ions migrate into surrounding areas especially under high humidity50. Summary and conclusions The folios of the Vienna Genesis were cut and resized at least once. Measurements of the text blocks and the margins suggest a maximum folio size of 400 x 292.5 mm. XRF analy- ses revealed that the elemental composition of the silver inks is consistent on all folios of the Vienna Genesis. The presumably two scribes used a similar ink recipe. According to XRF, XRD and SEM/EDX silver is the main component of the ink. Significant copper peaks were detected by XRF on all folios with a constant ratio of silver to copper intensi- ties. The XRF spectrum of reference ink ST1 with a copper content of 4.55 wt% compares well with XRF spectra of the silver ink on the Vienna Genesis. On one cross-section of a micro-sample, low amounts of copper were detected in the parchment by SEM/EDX. The results of XRF, XRD and SEM/EDX confirm the presence of silver chloride as main corrosion product. XRF detected chlorine in the parchment and in the ink with higher intensities in inked areas. In comparison with reference inks and the ink on two folios of the 6th century Codex Purpureus Petropolitanus, we assume that the scribes of the Vienna Genesis used a silver ink which contained copper. Due to several limitations, XRF analysis does not allow an exact quantification of the concentration of copper in the ink. Besides environmental in- fluences, the corrosion product silver chloride could also originate from the production process of the ink itself, for example the use of sodium chloride as a grinding aid for silver. The enhanced presence of chloride in the parchment could be an additional hint for con- tact of the manuscript with chlorine containing media, for instance with salty seawater or Mediterranean climate. We assume that the corrosion of the silver ink and the degradation of the parchment of Vienna Genesis are caused by a combination of internal and external factors: 50 Hofmann et al., 2015, p. 175. Open-Access-Publikation im Sinne der CC-Lizenz BY 4.0
back to the  book The Vienna Genesis - Material analysis and conservation of a Late Antique illuminated manuscript on purple parchment"
The Vienna Genesis Material analysis and conservation of a Late Antique illuminated manuscript on purple parchment