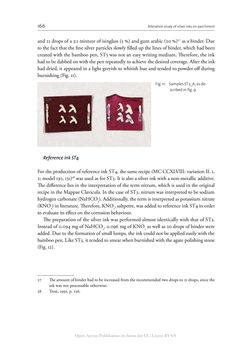 166 Alteration study of silver inks on parchment and 21 drops of a 3:1 mixture of isinglass (5 %) and gum arabic (20 %)27 as a binder. Due to the fact that the fine silver particles slowly filled up the lines of binder, which had been created with the bamboo pen, ST3 was not an easy writing medium. Therefore, the ink had to be dabbed on with the pen repeatedly to achieve the desired coverage. After the ink had dried, it appeared in a light greyish to whitish hue and tended to powder off during burnishing (Fig. 11). Reference ink ST4 For the production of reference ink ST4, the same recipe (MC CCXLVIII: variation II, 1, 2; model 130, 131)28 was used as for ST3. It is also a silver ink with a non-metallic additive. The difference lies in the interpretation of the term nitrum, which is used in the original recipe in the Mappae Clavicula. In the case of ST3, nitrum was interpreted to be sodium hydrogen carbonate (NaHCO3). Additionally, the term is interpreted as potassium nitrate (KNO3) in literature. Therefore, KNO3, saltpetre, was added to reference ink ST4 in order to evaluate its effect on the corrosion behaviour. The preparation of the silver ink was performed almost identically with that of ST3. Instead of 0.094 mg of NaHCO3, 0.096 mg of KNO3 as well as 20 drops of binder were added. Due to the formation of small lumps, the ink could not be applied easily with the bamboo pen. Like ST3, it tended to smear when burnished with the agate polishing stone (Fig. 12). 27 The amount of binder had to be increased from the recommended two drops to 21 drops, since the ink was not processable otherwise. 28 Trost, 1991, p. 236. Fig. 11: Samples ST3_A; as de- scribed in fig. 9. Open-Access-Publikation im Sinne der CC-Lizenz BY 4.0
back to the  book The Vienna Genesis - Material analysis and conservation of a Late Antique illuminated manuscript on purple parchment"
The Vienna Genesis Material analysis and conservation of a Late Antique illuminated manuscript on purple parchment