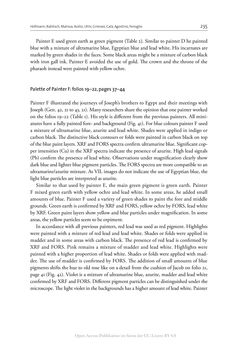 Hofmann, Rabitsch, Malissa, Aceto, Uhlir, Griesser, Calà, Agostino, Fenoglio 235 Painter E used green earth as green pigment (Table 2). Similar to painter D he painted blue with a mixture of ultramarine blue, Egyptian blue and lead white. His incarnates are marked by green shades in the faces. Some black areas might be a mixture of carbon black with iron gall ink. Painter E avoided the use of gold. The crown and the throne of the pharaoh instead were painted with yellow ochre. Palette of Painter F: folios 19–22, pages 37–44 Painter F illustrated the journeys of Joseph’s brothers to Egypt and their meetings with Joseph (Gen. 42, 21 to 43, 21). Many researchers share the opinion that one painter worked on the folios 19–22 (Table 1). His style is different from the previous painters. All mini- atures have a fully painted fore- and background (Fig. 41). For blue colours painter F used a mixture of ultramarine blue, azurite and lead white. Shades were applied in indigo or carbon black. The distinctive black contours or folds were painted in carbon black on top of the blue paint layers. XRF and FORS spectra confirm ultramarine blue. Significant cop- per intensities (Cu) in the XRF spectra indicate the presence of azurite. High lead signals (Pb) confirm the presence of lead white. Observations under magnification clearly show dark blue and lighter blue pigment particles. The FORS spectra are more compatible to an ultramarine/azurite mixture. As VIL images do not indicate the use of Egyptian blue, the light blue particles are interpreted as azurite. Similar to that used by painter E, the main green pigment is green earth. Painter F mixed green earth with yellow ochre and lead white. In some areas, he added small amounts of blue. Painter F used a variety of green shades to paint the fore and middle grounds. Green earth is confirmed by XRF and FORS, yellow ochre by FORS, lead white by XRF. Green paint layers show yellow and blue particles under magnification. In some areas, the yellow particles seem to be orpiment. In accordance with all previous painters, red lead was used as red pigment. Highlights were painted with a mixture of red lead and lead white. Shades or folds were applied in madder and in some areas with carbon black. The presence of red lead is confirmed by XRF and FORS. Pink remains a mixture of madder and lead white. Highlights were painted with a higher proportion of lead white. Shades or folds were applied with mad- der. The use of madder is confirmed by FORS. The addition of small amounts of blue pigments shifts the hue to old rose like on a detail from the cushion of Jacob on folio 21, page 41 (Fig. 42). Violet is a mixture of ultramarine blue, azurite, madder and lead white confirmed by XRF and FORS. Different pigment particles can be distinguished under the microscope. The light violet in the backgrounds has a higher amount of lead white. Painter Open-Access-Publikation im Sinne der CC-Lizenz BY 4.0
back to the  book The Vienna Genesis - Material analysis and conservation of a Late Antique illuminated manuscript on purple parchment"
The Vienna Genesis Material analysis and conservation of a Late Antique illuminated manuscript on purple parchment