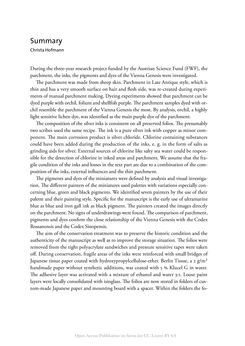 Summary Christa Hofmann During the three-year research project funded by the Austrian Science Fund (FWF), the parchment, the inks, the pigments and dyes of the Vienna Genesis were investigated. The parchment was made from sheep skin. Parchment in Late Antique style, which is thin and has a very smooth surface on hair and flesh side, was re-created during experi- ments of manual parchment making. Dyeing experiments showed that parchment can be dyed purple with orchil, folium and shellfish purple. The parchment samples dyed with or- chil resemble the parchment of the Vienna Genesis the most. By analysis, orchil, a highly light sensitive lichen dye, was identified as the main purple dye of the parchment. The composition of the silver inks is consistent on all preserved folios. The presumably two scribes used the same recipe. The ink is a pure silver ink with copper as minor com- ponent. The main corrosion product is silver chloride. Chlorine containing substances could have been added during the production of the inks, e. g. in the form of salts as grinding aids for silver. External sources of chlorine like salty sea water could be respon- sible for the detection of chlorine in inked areas and parchment. We assume that the fra- gile condition of the inks and losses in the text part are due to a combination of the com- position of the inks, external influences and the thin parchment. The pigments and dyes of the miniatures were defined by analysis and visual investiga- tion. The different painters of the miniatures used palettes with variations especially con- cerning blue, green and black pigments. We identified seven painters by the use of their palette and their painting style. Specific for the manuscript is the early use of ultramarine blue as blue and iron gall ink as black pigment. The painters created the images directly on the parchment. No signs of underdrawings were found. The comparison of parchment, pigments and dyes confirm the close relationship of the Vienna Genesis with the Codex Rossanensis and the Codex Sinopensis. The aim of the conservation treatment was to preserve the historic condition and the authenticity of the manuscript as well as to improve the storage situation. The folios were removed from the tight polyacrylate sandwiches and pressure sensitive tapes were taken off. During conservation, fragile areas of the inks were reinforced with small bridges of Japanese tissue paper coated with hydroxypropylcellulose-ether. Berlin Tissue, a 2 g/m² handmade paper without synthetic additions, was coated with 5 % Klucel G in water. The adhesive layer was activated with a mixture of ethanol and water 3:1. Loose paint layers were locally consolidated with isinglass. The folios are now stored in folders of cus- tom-made Japanese paper and mounting board with a spacer. Within the folders the fo- Open-Access-Publikation im Sinne der CC-Lizenz BY 4.0
back to the  book The Vienna Genesis - Material analysis and conservation of a Late Antique illuminated manuscript on purple parchment"
The Vienna Genesis Material analysis and conservation of a Late Antique illuminated manuscript on purple parchment