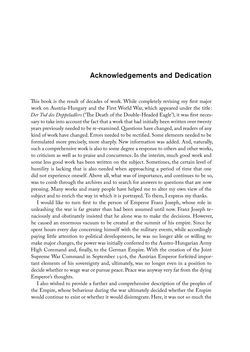 Acknowledgements and Dedication This book is the result of decades of work. While completely revising my first major work on Austria-Hungary and the First World War, which appeared under the title : Der Tod des Doppeladlers (‘The Death of the Double-Headed Eagle’), it was first neces- sary to take into account the fact that a work that had initially been written over twenty years previously needed to be re-examined. Questions have changed, and readers of any kind of work have changed. Errors needed to be rectified. Some elements needed to be formulated more precisely, more sharply. New information was added. And, naturally, such a comprehensive work is also to some degree a response to others and other works, to criticism as well as to praise and concurrence. In the interim, much good work and some less good work has been written on the subject. Sometimes, the certain level of humility is lacking that is also needed when approaching a period of time that one did not experience oneself. Above all, what was of importance, and continues to be so, was to comb through the archives and to search for answers to questions that are now pressing. Many works and many people have helped me to alter my own view of the subject and to enrich the way in which it is portrayed. To them, I express my thanks. I would like to turn first to the person of Emperor Franz Joseph, whose role in unleashing the war is far greater than had been assumed until now. Franz Joseph te- naciously and obstinately insisted that he alone was to make the decisions. However, he caused an enormous vacuum to be created at the summit of his empire. Since he spent hours every day concerning himself with the military events, while accordingly paying little attention to political developments, he was no longer able or willing to make major changes, the power was initially conferred to the Austro-Hungarian Army High Command and, finally, to the German Empire. With the creation of the Joint Supreme War Command in September 1916, the Austrian Emperor forfeited impor- tant elements of his sovereignty and, ultimately, was no longer even in a position to decide whether to wage war or pursue peace. Peace was anyway very far from the dying Emperor’s thoughts. I also wished to provide a further and comprehensive description of the peoples of the Empire, whose behaviour during the war ultimately decided whether the Empire would continue to exist or whether it would disintegrate. Here, it was not so much the
zurück zum  Buch THE FIRST WORLD WAR - and the End of the Habsburg Monarchy, 1914 – 1918"
THE FIRST WORLD WAR and the End of the Habsburg Monarchy, 1914 – 1918
Entnommen aus der FWF-E-Book-Library