Seite - 14 - in The Forest Farm - Tales of the Austrian Tyrol 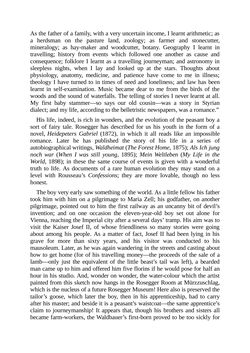 As the father of a family, with a very uncertain income, I learnt arithmetic; as a herdsman on the pasture land, zoology; as farmer and stonecutter, mineralogy; as hay-maker and woodcutter, botany. Geography I learnt in travelling; history from events which followed one another as cause and consequence; folklore I learnt as a travelling journeyman; and astronomy in sleepless nights, when I lay and looked up at the stars. Thoughts about physiology, anatomy, medicine, and patience have come to me in illness; theology I have turned to in times of need and loneliness; and law has been learnt in self-examination. Music became dear to me from the birds of the woods and the sound of waterfalls. The telling of stories I never learnt at all. My first baby stammer—so says our old cousin—was a story in Styrian dialect; and my life, according to the belletristic newspapers, was a romance.” His life, indeed, is rich in wonders, and the evolution of the peasant boy a sort of fairy tale. Rosegger has described for us his youth in the form of a novel, Heidepeters Gabriel (1872), in which it all reads like an impossible romance. Later he has published the story of his life in a series of autobiographical writings, Waldheimat (The Forest Home, 1875); Als Ich jung noch war (When I was still young, 1895); Mein Weltleben (My Life in the World, 1898); in these the same course of events is given with a wonderful truth to life. As documents of a rare human evolution they may stand on a level with Rousseau’s Confessions; they are more lovable, though no less honest. The boy very early saw something of the world. As a little fellow his father took him with him on a pilgrimage to Maria Zell; his godfather, on another pilgrimage, pointed out to him the first railway as an uncanny bit of devil’s invention; and on one occasion the eleven-year-old boy set out alone for Vienna, reaching the Imperial city after a several days’ tramp. His aim was to visit the Kaiser Josef II, of whose friendliness so many stories were going about among his people. As a matter of fact, Josef II had been lying in his grave for more than sixty years, and his visitor was conducted to his mausoleum. Later, as he was again wandering in the streets and casting about how to get home (for of his travelling money—the proceeds of the sale of a lamb—only just the equivalent of the little beast’s tail was left), a bearded man came up to him and offered him five florins if he would pose for half an hour in his studio. And, wonder on wonder, the water-colour which the artist painted from this sketch now hangs in the Rosegger Room at Mürzzuschlag, which is the nucleus of a future Rosegger Museum! Here also is preserved the tailor’s goose, which later the boy, then in his apprenticeship, had to carry after his master; and beside it is a peasant’s waistcoat—the same apprentice’s claim to journeymanship! It appears that, though his brothers and sisters all became farm-workers, the Waldbauer’s first-born proved to be too sickly for
zurück zum  Buch The Forest Farm - Tales of the Austrian Tyrol"
The Forest Farm Tales of the Austrian Tyrol