Seite - 17 - in The Forest Farm - Tales of the Austrian Tyrol 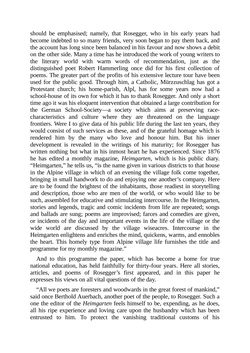 should be emphasised; namely, that Rosegger, who in his early years had become indebted to so many friends, very soon began to pay them back, and the account has long since been balanced in his favour and now shows a debit on the other side. Many a time has he introduced the work of young writers to the literary world with warm words of recommendation, just as the distinguished poet Robert Hammerling once did for his first collection of poems. The greater part of the profits of his extensive lecture tour have been used for the public good. Through him, a Catholic, Mürzzuschlag has got a Protestant church; his home-parish, Alpl, has for some years now had a school-house of its own for which it has to thank Rosegger. And only a short time ago it was his eloquent intervention that obtained a large contribution for the German School-Society—a society which aims at preserving race- characteristics and culture where they are threatened on the language frontiers. Were I to give data of his public life during the last ten years, they would consist of such services as these, and of the grateful homage which is rendered him by the many who love and honour him. But his inner development is revealed in the writings of his maturity; for Rosegger has written nothing but what in his inmost heart he has experienced. Since 1876 he has edited a monthly magazine, Heimgarten, which is his public diary. “Heimgarten,” he tells us, “is the name given in various districts to that house in the Alpine village in which of an evening the village folk come together, bringing in small handwork to do and enjoying one another’s company. Here are to be found the brightest of the inhabitants, those readiest in storytelling and description, those who are men of the world, or who would like to be such, assembled for educative and stimulating intercourse. In the Heimgarten, stories and legends, tragic and comic incidents from life are repeated; songs and ballads are sung; poems are improvised; farces and comedies are given, or incidents of the day and important events in the life of the village or the wide world are discussed by the village wiseacres. Intercourse in the Heimgarten enlightens and enriches the mind, quickens, warms, and ennobles the heart. This homely type from Alpine village life furnishes the title and programme for my monthly magazine.” And to this programme the paper, which has become a home for true national education, has held faithfully for thirty-four years. Here all stories, articles, and poems of Rosegger’s first appeared, and in this paper he expresses his views on all vital questions of the day. “All we poets are foresters and woodwards in the great forest of mankind,” said once Berthold Auerbach, another poet of the people, to Rosegger. Such a one the editor of the Heimgarten feels himself to be, expending, as he does, all his ripe experience and loving care upon the husbandry which has been entrusted to him. To protect the vanishing traditional customs of his
zurück zum  Buch The Forest Farm - Tales of the Austrian Tyrol"
The Forest Farm Tales of the Austrian Tyrol