Seite - 42 - in The Forest Farm - Tales of the Austrian Tyrol 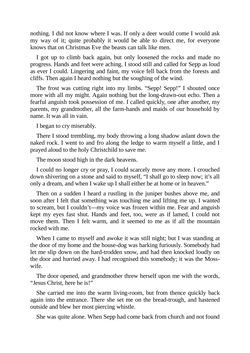 nothing. I did not know where I was. If only a deer would come I would ask my way of it; quite probably it would be able to direct me, for everyone knows that on Christmas Eve the beasts can talk like men. I got up to climb back again, but only loosened the rocks and made no progress. Hands and feet were aching. I stood still and called for Sepp as loud as ever I could. Lingering and faint, my voice fell back from the forests and cliffs. Then again I heard nothing but the soughing of the wind. The frost was cutting right into my limbs. “Sepp! Sepp!” I shouted once more with all my might. Again nothing but the long-drawn-out echo. Then a fearful anguish took possession of me. I called quickly, one after another, my parents, my grandmother, all the farm-hands and maids of our household by name. It was all in vain. I began to cry miserably. There I stood trembling, my body throwing a long shadow aslant down the naked rock. I went to and fro along the ledge to warm myself a little, and I prayed aloud to the holy Christchild to save me. The moon stood high in the dark heavens. I could no longer cry or pray, I could scarcely move any more. I crouched down shivering on a stone and said to myself, “I shall go to sleep now; it’s all only a dream, and when I wake up I shall either be at home or in heaven.” Then on a sudden I heard a rustling in the juniper bushes above me, and soon after I felt that something was touching me and lifting me up. I wanted to scream, but I couldn’t—my voice was frozen within me. Fear and anguish kept my eyes fast shut. Hands and feet, too, were as if lamed, I could not move them. Then I felt warm, and it seemed to me as if all the mountain rocked with me. When I came to myself and awoke it was still night; but I was standing at the door of my home and the house-dog was barking furiously. Somebody had let me slip down on the hard-trodden snow, and had then knocked loudly on the door and hurried away. I had recognised this somebody; it was the Moss- wife. The door opened, and grandmother threw herself upon me with the words, “Jesus Christ, here he is!” She carried me into the warm living-room, but from thence quickly back again into the entrance. There she set me on the bread-trough, and hastened outside and blew her most piercing whistle. She was quite alone. When Sepp had come back from church and not found
zurück zum  Buch The Forest Farm - Tales of the Austrian Tyrol"
The Forest Farm Tales of the Austrian Tyrol