Seite - 52 - in The Forest Farm - Tales of the Austrian Tyrol 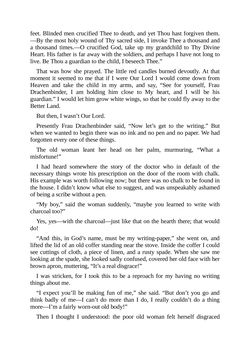 feet. Blinded men crucified Thee to death, and yet Thou hast forgiven them. —By the most holy wound of Thy sacred side, I invoke Thee a thousand and a thousand times.—O crucified God, take up my grandchild to Thy Divine Heart. His father is far away with the soldiers, and perhaps I have not long to live. Be Thou a guardian to the child, I beseech Thee.” That was how she prayed. The little red candles burned devoutly. At that moment it seemed to me that if I were Our Lord I would come down from Heaven and take the child in my arms, and say, “See for yourself, Frau Drachenbinder, I am holding him close to My heart, and I will be his guardian.” I would let him grow white wings, so that he could fly away to the Better Land. But then, I wasn’t Our Lord. Presently Frau Drachenbinder said, “Now let’s get to the writing.” But when we wanted to begin there was no ink and no pen and no paper. We had forgotten every one of these things. The old woman leant her head on her palm, murmuring, “What a misfortune!” I had heard somewhere the story of the doctor who in default of the necessary things wrote his prescription on the door of the room with chalk. His example was worth following now; but there was no chalk to be found in the house. I didn’t know what else to suggest, and was unspeakably ashamed of being a scribe without a pen. “My boy,” said the woman suddenly, “maybe you learned to write with charcoal too?” Yes, yes—with the charcoal—just like that on the hearth there; that would do! “And this, in God’s name, must be my writing-paper,” she went on, and lifted the lid of an old coffer standing near the stove. Inside the coffer I could see cuttings of cloth, a piece of linen, and a rusty spade. When she saw me looking at the spade, she looked sadly confused, covered her old face with her brown apron, muttering, “It’s a real disgrace!” I was stricken, for I took this to be a reproach for my having no writing things about me. “I expect you’ll be making fun of me,” she said. “But don’t you go and think badly of me—I can’t do more than I do, I really couldn’t do a thing more—I’m a fairly worn-out old body!” Then I thought I understood: the poor old woman felt herself disgraced
zurück zum  Buch The Forest Farm - Tales of the Austrian Tyrol"
The Forest Farm Tales of the Austrian Tyrol