Seite - 67 - in The Forest Farm - Tales of the Austrian Tyrol 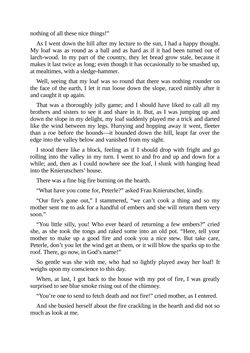 nothing of all these nice things!” As I went down the hill after my lecture to the sun, I had a happy thought. My loaf was as round as a ball and as hard as if it had been turned out of larch-wood. In my part of the country, they let bread grow stale, because it makes it last twice as long; even though it has occasionally to be smashed up, at mealtimes, with a sledge-hammer. Well, seeing that my loaf was so round that there was nothing rounder on the face of the earth, I let it run loose down the slope, raced nimbly after it and caught it up again. That was a thoroughly jolly game; and I should have liked to call all my brothers and sisters to see it and share in it. But, as I was jumping up and down the slope in my delight, my loaf suddenly played me a trick and darted like the wind between my legs. Hurrying and hopping away it went, fleeter than a roe before the hounds—it bounded down the hill, leapt far over the edge into the valley below and vanished from my sight. I stood there like a block, feeling as if I should drop with fright and go rolling into the valley in my turn. I went to and fro and up and down for a while; and, then as I could nowhere see the loaf, I slunk with hanging head into the Knierutschers’ house. There was a fine big fire burning on the hearth. “What have you come for, Peterle?” asked Frau Knierutscher, kindly. “Our fire’s gone out,” I stammered, “we can’t cook a thing and so my mother sent me to ask for a handful of embers and she will return them very soon.” “You little silly, you! Who ever heard of returning a few embers?” cried she, as she took the tongs and raked some into an old pot. “Here, tell your mother to make up a good fire and cook you a nice stew. But take care, Peterle, don’t you let the wind get at them, or it will blow the sparks up to the roof. There, go now, in God’s name!” So gentle was she with me, who had so lightly played away her loaf! It weighs upon my conscience to this day. When, at last, I got back to the house with my pot of fire, I was greatly surprised to see blue smoke rising out of the chimney. “You’re one to send to fetch death and not fire!” cried mother, as I entered. And she busied herself about the fire crackling in the hearth and did not so much as look at me.
zurück zum  Buch The Forest Farm - Tales of the Austrian Tyrol"
The Forest Farm Tales of the Austrian Tyrol