Seite - 80 - in The Forest Farm - Tales of the Austrian Tyrol 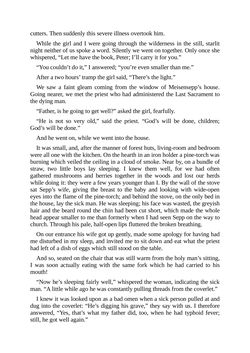 cutters. Then suddenly this severe illness overtook him. While the girl and I were going through the wilderness in the still, starlit night neither of us spoke a word. Silently we went on together. Only once she whispered, “Let me have the book, Peter; I’ll carry it for you.” “You couldn’t do it,” I answered; “you’re even smaller than me.” After a two hours’ tramp the girl said, “There’s the light.” We saw a faint gleam coming from the window of Meisensepp’s house. Going nearer, we met the priest who had administered the Last Sacrament to the dying man. “Father, is he going to get well?” asked the girl, fearfully. “He is not so very old,” said the priest. “God’s will be done, children; God’s will be done.” And he went on, while we went into the house. It was small, and, after the manner of forest huts, living-room and bedroom were all one with the kitchen. On the hearth in an iron holder a pine-torch was burning which veiled the ceiling in a cloud of smoke. Near by, on a bundle of straw, two little boys lay sleeping. I knew them well, for we had often gathered mushrooms and berries together in the woods and lost our herds while doing it: they were a few years younger than I. By the wall of the stove sat Sepp’s wife, giving the breast to the baby and looking with wide-open eyes into the flame of the pine-torch; and behind the stove, on the only bed in the house, lay the sick man. He was sleeping; his face was wasted, the greyish hair and the beard round the chin had been cut short, which made the whole head appear smaller to me than formerly when I had seen Sepp on the way to church. Through his pale, half-open lips fluttered the broken breathing. On our entrance his wife got up gently, made some apology for having had me disturbed in my sleep, and invited me to sit down and eat what the priest had left of a dish of eggs which still stood on the table. And so, seated on the chair that was still warm from the holy man’s sitting, I was soon actually eating with the same fork which he had carried to his mouth! “Now he’s sleeping fairly well,” whispered the woman, indicating the sick man. “A little while ago he was constantly pulling threads from the coverlet.” I knew it was looked upon as a bad omen when a sick person pulled at and dug into the coverlet: “He’s digging his grave,” they say with us. I therefore answered, “Yes, that’s what my father did, too, when he had typhoid fever; still, he got well again.”
zurück zum  Buch The Forest Farm - Tales of the Austrian Tyrol"
The Forest Farm Tales of the Austrian Tyrol