Seite - 84 - in The Forest Farm - Tales of the Austrian Tyrol 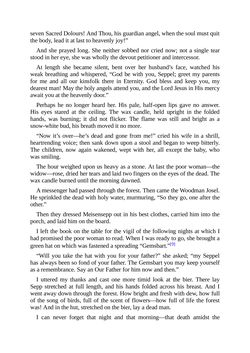 seven Sacred Dolours! And Thou, his guardian angel, when the soul must quit the body, lead it at last to heavenly joy!” And she prayed long. She neither sobbed nor cried now; not a single tear stood in her eye, she was wholly the devout petitioner and intercessor. At length she became silent, bent over her husband’s face, watched his weak breathing and whispered, “God be with you, Seppel; greet my parents for me and all our kinsfolk there in Eternity. God bless and keep you, my dearest man! May the holy angels attend you, and the Lord Jesus in His mercy await you at the heavenly door.” Perhaps he no longer heard her. His pale, half-open lips gave no answer. His eyes stared at the ceiling. The wax candle, held upright in the folded hands, was burning; it did not flicker. The flame was still and bright as a snow-white bud, his breath moved it no more. “Now it’s over—he’s dead and gone from me!” cried his wife in a shrill, heartrending voice; then sank down upon a stool and began to weep bitterly. The children, now again wakened, wept with her, all except the baby, who was smiling. The hour weighed upon us heavy as a stone. At last the poor woman—the widow—rose, dried her tears and laid two fingers on the eyes of the dead. The wax candle burned until the morning dawned. A messenger had passed through the forest. Then came the Woodman Josel. He sprinkled the dead with holy water, murmuring, “So they go, one after the other.” Then they dressed Meisensepp out in his best clothes, carried him into the porch, and laid him on the board. I left the book on the table for the vigil of the following nights at which I had promised the poor woman to read. When I was ready to go, she brought a green hat on which was fastened a spreading “Gemsbart.”[9] “Will you take the hat with you for your father?” she asked; “my Seppel has always been so fond of your father. The Gemsbart you may keep yourself as a remembrance. Say an Our Father for him now and then.” I uttered my thanks and cast one more timid look at the bier. There lay Sepp stretched at full length, and his hands folded across his breast. And I went away down through the forest. How bright and fresh with dew, how full of the song of birds, full of the scent of flowers—how full of life the forest was! And in the hut, stretched on the bier, lay a dead man. I can never forget that night and that morning—that death amidst the
zurück zum  Buch The Forest Farm - Tales of the Austrian Tyrol"
The Forest Farm Tales of the Austrian Tyrol