Seite - 87 - in The Forest Farm - Tales of the Austrian Tyrol 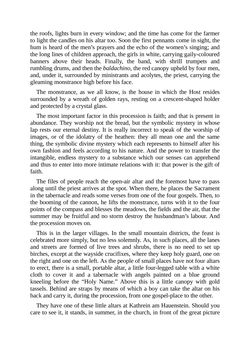 the roofs, lights burn in every window; and the time has come for the farmer to light the candles on his altar too. Soon the first pennants come in sight, the hum is heard of the men’s prayers and the echo of the women’s singing; and the long lines of children approach, the girls in white, carrying gaily-coloured banners above their heads. Finally, the band, with shrill trumpets and rumbling drums, and then the baldachino, the red canopy upheld by four men, and, under it, surrounded by ministrants and acolytes, the priest, carrying the gleaming monstrance high before his face. The monstrance, as we all know, is the house in which the Host resides surrounded by a wreath of golden rays, resting on a crescent-shaped holder and protected by a crystal glass. The most important factor in this procession is faith; and that is present in abundance. They worship not the bread, but the symbolic mystery in whose lap rests our eternal destiny. It is really incorrect to speak of the worship of images, or of the idolatry of the heathen: they all mean one and the same thing, the symbolic divine mystery which each represents to himself after his own fashion and feels according to his nature. And the power to transfer the intangible, endless mystery to a substance which our senses can apprehend and thus to enter into more intimate relations with it: that power is the gift of faith. The files of people reach the open-air altar and the foremost have to pass along until the priest arrives at the spot. When there, he places the Sacrament in the tabernacle and reads some verses from one of the four gospels. Then, to the booming of the cannon, he lifts the monstrance, turns with it to the four points of the compass and blesses the meadows, the fields and the air, that the summer may be fruitful and no storm destroy the husbandman’s labour. And the procession moves on. This is in the larger villages. In the small mountain districts, the feast is celebrated more simply, but no less solemnly. As, in such places, all the lanes and streets are formed of live trees and shrubs, there is no need to set up birches, except at the wayside crucifixes, where they keep holy guard, one on the right and one on the left. As the people of small places have not four altars to erect, there is a small, portable altar, a little four-legged table with a white cloth to cover it and a tabernacle with angels painted on a blue ground kneeling before the “Holy Name.” Above this is a little canopy with gold tassels. Behind are straps by means of which a boy can take the altar on his back and carry it, during the procession, from one gospel-place to the other. They have one of these little altars at Kathrein am Hauenstein. Should you care to see it, it stands, in summer, in the church, in front of the great picture
zurück zum  Buch The Forest Farm - Tales of the Austrian Tyrol"
The Forest Farm Tales of the Austrian Tyrol