Seite - 88 - in The Forest Farm - Tales of the Austrian Tyrol 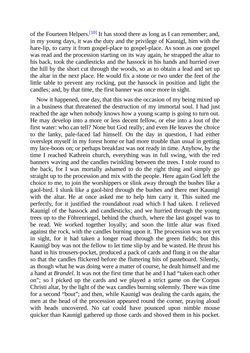 of the Fourteen Helpers.[10] It has stood there as long as I can remember; and, in my young days, it was the duty and the privilege of Kaunigl, him with the hare-lip, to carry it from gospel-place to gospel-place. As soon as one gospel was read and the procession starting on its way again, he strapped the altar to his back, took the candlesticks and the hassock in his hands and hurried over the hill by the short cut through the woods, so as to obtain a lead and set up the altar in the next place. He would fix a stone or two under the feet of the little table to prevent any rocking, put the hassock in position and light the candles; and, by that time, the first banner was once more in sight. Now it happened, one day, that this was the occasion of my being mixed up in a business that threatened the destruction of my immortal soul. I had just reached the age when nobody knows how a young scamp is going to turn out. He may develop into a more or less decent fellow, or else into a lout of the first water: who can tell? None but God really; and even He leaves the choice to the lanky, pale-faced lad himself. On the day in question, I had either overslept myself in my forest home or had more trouble than usual in getting my lace-boots on; or perhaps breakfast was not ready in time. Anyhow, by the time I reached Kathrein church, everything was in full swing, with the red banners waving and the candles twinkling between the trees. I stole round to the back, for I was mortally ashamed to do the right thing and simply go straight up to the procession and mix with the people. Here again God left the choice to me, to join the worshippers or slink away through the bushes like a gaol-bird. I slunk like a gaol-bird through the bushes and there met Kaunigl with the altar. He at once asked me to help him carry it. This suited me perfectly, for it justified the roundabout road which I had taken. I relieved Kaunigl of the hassock and candlesticks; and we hurried through the young trees up to the Föhrenriegel, behind the church, where the last gospel was to be read. We worked together loyally; and soon the little altar was fixed against the rock, with the candles burning upon it. The procession was not yet in sight, for it had taken a longer road through the green fields; but this Kaunigl boy was not the fellow to let time slip by and be wasted. He thrust his hand in his trousers-pocket, produced a pack of cards and flung it on the altar so that the candles flickered before the fluttering bits of pasteboard. Silently, as though what he was doing were a matter of course, he dealt himself and me a hand at Brandel. It was not the first time that he and I had “taken each other on”; so I picked up the cards and we played a strict game on the Corpus Christi altar, by the light of the wax candles burning solemnly. There was time for a second “bout”; and then, while Kaunigl was dealing the cards again, the men at the head of the procession appeared round the corner, praying aloud with heads uncovered. No cat could have pounced upon nimble mouse quicker than Kaunigl gathered up those cards and shoved them in his pocket.
zurück zum  Buch The Forest Farm - Tales of the Austrian Tyrol"
The Forest Farm Tales of the Austrian Tyrol