Seite - 89 - in The Forest Farm - Tales of the Austrian Tyrol 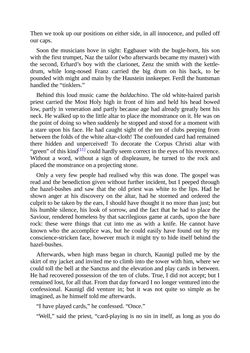 Then we took up our positions on either side, in all innocence, and pulled off our caps. Soon the musicians hove in sight: Eggbauer with the bugle-horn, his son with the first trumpet, Naz the tailor (who afterwards became my master) with the second, Erhard’s boy with the clarionet, Zenz the smith with the kettle- drum, while long-nosed Franz carried the big drum on his back, to be pounded with might and main by the Haustein innkeeper. Ferdl the huntsman handled the “tinklers.” Behind this loud music came the baldachino. The old white-haired parish priest carried the Most Holy high in front of him and held his head bowed low, partly in veneration and partly because age had already greatly bent his neck. He walked up to the little altar to place the monstrance on it. He was on the point of doing so when suddenly he stopped and stood for a moment with a stare upon his face. He had caught sight of the ten of clubs peeping from between the folds of the white altar-cloth! The confounded card had remained there hidden and unperceived! To decorate the Corpus Christi altar with “green” of this kind[11] could hardly seem correct in the eyes of his reverence. Without a word, without a sign of displeasure, he turned to the rock and placed the monstrance on a projecting stone. Only a very few people had realised why this was done. The gospel was read and the benediction given without further incident, but I peeped through the hazel-bushes and saw that the old priest was white to the lips. Had he shown anger at his discovery on the altar, had he stormed and ordered the culprit to be taken by the ears, I should have thought it no more than just; but his humble silence, his look of sorrow, and the fact that he had to place the Saviour, rendered homeless by that sacrilegious game at cards, upon the bare rock: these were things that cut into me as with a knife. He cannot have known who the accomplice was, but he could easily have found out by my conscience-stricken face, however much it might try to hide itself behind the hazel-bushes. Afterwards, when high mass began in church, Kaunigl pulled me by the skirt of my jacket and invited me to climb into the tower with him, where we could toll the bell at the Sanctus and the elevation and play cards in between. He had recovered possession of the ten of clubs. True, I did not accept; but I remained lost, for all that. From that day forward I no longer ventured into the confessional. Kaunigl did venture in; but it was not quite so simple as he imagined, as he himself told me afterwards. “I have played cards,” he confessed. “Once.” “Well,” said the priest, “card-playing is no sin in itself, as long as you do
zurück zum  Buch The Forest Farm - Tales of the Austrian Tyrol"
The Forest Farm Tales of the Austrian Tyrol