Seite - 96 - in The Forest Farm - Tales of the Austrian Tyrol 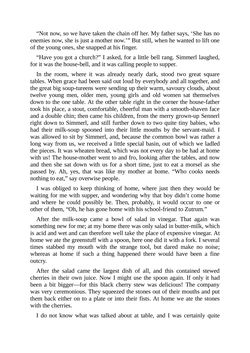 “Not now, so we have taken the chain off her. My father says, ‘She has no enemies now, she is just a mother now.’” But still, when he wanted to lift one of the young ones, she snapped at his finger. “Have you got a church?” I asked, for a little bell rang. Simmerl laughed, for it was the house-bell, and it was calling people to supper. In the room, where it was already nearly dark, stood two great square tables. When grace had been said out loud by everybody and all together, and the great big soup-tureens were sending up their warm, savoury clouds, about twelve young men, older men, young girls and old women sat themselves down to the one table. At the other table right in the corner the house-father took his place, a stout, comfortable, cheerful man with a smooth-shaven face and a double chin; then came his children, from the merry grown-up Sennerl right down to Simmerl, and still further down to two quite tiny babies, who had their milk-soup spooned into their little mouths by the servant-maid. I was allowed to sit by Simmerl, and, because the common bowl was rather a long way from us, we received a little special basin, out of which we ladled the pieces. It was wheaten bread, which was not every day to be had at home with us! The house-mother went to and fro, looking after the tables, and now and then she sat down with us for a short time, just to eat a morsel as she passed by. Ah, yes, that was like my mother at home. “Who cooks needs nothing to eat,” say overwise people. I was obliged to keep thinking of home, where just then they would be waiting for me with supper, and wondering why that boy didn’t come home and where he could possibly be. Then, probably, it would occur to one or other of them, “Oh, he has gone home with his school-friend to Zutrum.” After the milk-soup came a bowl of salad in vinegar. That again was something new for me; at my home there was only salad in butter-milk, which is acid and wet and can therefore well take the place of expensive vinegar. At home we ate the greenstuff with a spoon, here one did it with a fork. I several times stabbed my mouth with the strange tool, but dared make no noise; whereas at home if such a thing happened there would have been a fine outcry. After the salad came the largest dish of all, and this contained stewed cherries in their own juice. Now I might use the spoon again. If only it had been a bit bigger—for this black cherry stew was delicious! The company was very ceremonious. They squeezed the stones out of their mouths and put them back either on to a plate or into their fists. At home we ate the stones with the cherries. I do not know what was talked about at table, and I was certainly quite
zurück zum  Buch The Forest Farm - Tales of the Austrian Tyrol"
The Forest Farm Tales of the Austrian Tyrol