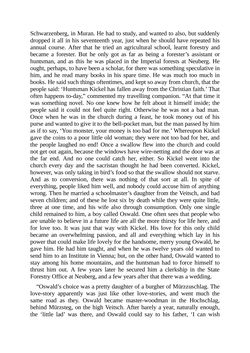 Schwarzenberg, in Muran. He had to study, and wanted to also, but suddenly dropped it all in his seventeenth year, just when he should have repeated his annual course. After that he tried an agricultural school, learnt forestry and became a forester. But he only got as far as being a forester’s assistant or huntsman, and as this he was placed in the Imperial forests at Neuberg. He ought, perhaps, to have been a scholar, for there was something speculative in him, and he read many books in his spare time. He was much too much in books. He said such things oftentimes, and kept so away from church, that the people said: ‘Huntsman Kickel has fallen away from the Christian faith.’ That often happens to-day,” commented my travelling companion. “At that time it was something novel. No one knew how he felt about it himself inside; the people said it could not feel quite right. Otherwise he was not a bad man. Once when he was in the church during a feast, he took money out of his purse and wanted to give it to the bell-pocket man, but the man passed by him as if to say, ‘You monster, your money is too bad for me.’ Whereupon Kickel gave the coins to a poor little old woman; they were not too bad for her, and the people laughed no end! Once a swallow flew into the church and could not get out again, because the windows have wire-netting and the door was at the far end. And no one could catch her, either. So Kickel went into the church every day and the sacristan thought he had been converted. Kickel, however, was only taking in bird’s food so that the swallow should not starve. And as to conversion, there was nothing of that sort at all. In spite of everything, people liked him well, and nobody could accuse him of anything wrong. Then he married a schoolmaster’s daughter from the Veitsch, and had seven children; and of these he lost six by death while they were quite little, three at one time, and his wife also through consumption. Only one single child remained to him, a boy called Oswald. One often sees that people who are unable to believe in a future life are all the more thirsty for life here, and for love too. It was just that way with Kickel. His love for this only child became an overwhelming passion, and all and everything which lay in his power that could make life lovely for the handsome, merry young Oswald, he gave him. He had him taught, and when he was twelve years old wanted to send him to an Institute in Vienna; but, on the other hand, Oswald wanted to stay among his home mountains, and the huntsman had to force himself to thrust him out. A few years later he secured him a clerkship in the State Forestry Office at Neuberg, and a few years after that there was a wedding. “Oswald’s choice was a pretty daughter of a burgher of Mürzzuschlag. The love-story apparently was just like other love-stories, and went much the same road as they. Oswald became master-woodman in the Hochschlag, behind Mürzsteg, on the high Veitsch. After barely a year, naturally enough, the ‘little lad’ was there, and Oswald could say to his father, ‘I can wish
zurück zum  Buch The Forest Farm - Tales of the Austrian Tyrol"
The Forest Farm Tales of the Austrian Tyrol