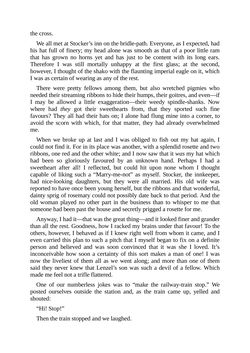 the cross. We all met at Stocker’s inn on the bridle-path. Everyone, as I expected, had his hat full of finery; my head alone was smooth as that of a poor little ram that has grown no horns yet and has just to be content with its long ears. Therefore I was still mortally unhappy at the first glass; at the second, however, I thought of the shako with the flaunting imperial eagle on it, which I was as certain of wearing as any of the rest. There were pretty fellows among them, but also wretched pigmies who needed their streaming ribbons to hide their humps, their goitres, and even—if I may be allowed a little exaggeration—their weedy spindle-shanks. Now where had they got their sweethearts from, that they sported such fine favours? They all had their hats on; I alone had flung mine into a corner, to avoid the scorn with which, for that matter, they had already overwhelmed me. When we broke up at last and I was obliged to fish out my hat again, I could not find it. For in its place was another, with a splendid rosette and two ribbons, one red and the other white; and I now saw that it was my hat which had been so gloriously favoured by an unknown hand. Perhaps I had a sweetheart after all! I reflected, but could hit upon none whom I thought capable of liking such a “Marry-me-not” as myself. Stocker, the innkeeper, had nice-looking daughters, but they were all married. His old wife was reported to have once been young herself, but the ribbons and that wonderful, dainty sprig of rosemary could not possibly date back to that period. And the old woman played no other part in the business than to whisper to me that someone had been past the house and secretly prigged a rosette for me. Anyway, I had it—that was the great thing—and it looked finer and grander than all the rest. Goodness, how I racked my brains under that favour! To the others, however, I behaved as if I knew right well from whom it came, and I even carried this plan to such a pitch that I myself began to fix on a definite person and believed and was soon convinced that it was she I loved. It’s inconceivable how soon a certainty of this sort makes a man of one! I was now the liveliest of them all as we went along; and more than one of them said they never knew that Lenzel’s son was such a devil of a fellow. Which made me feel not a trifle flattered. One of our numberless jokes was to “make the railway-train stop.” We posted ourselves outside the station and, as the train came up, yelled and shouted: “Hi! Stop!” Then the train stopped and we laughed.
zurück zum  Buch The Forest Farm - Tales of the Austrian Tyrol"
The Forest Farm Tales of the Austrian Tyrol