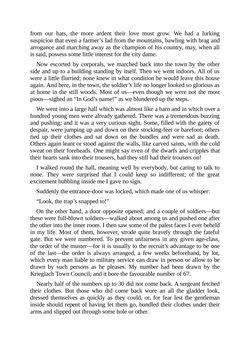 from our hats, the more ardent their love must grow. We had a lurking suspicion that even a farmer’s lad from the mountains, bawling with brag and arrogance and marching away as the champion of his country, may, when all is said, possess some little interest for the city dame. Now escorted by corporals, we marched back into the town by the other side and up to a building standing by itself. Then we went indoors. All of us were a little flurried; none knew in what condition he would leave this house again. And here, in the town, the soldier’s life no longer looked so glorious as at home in the still woods. Most of us—even though we were not the most pious—sighed an “In God’s name!” as we blundered up the steps. We went into a large hall which was almost like a barn and in which over a hundred young men were already gathered. There was a tremendous buzzing and pushing; and it was a very curious sight. Some, filled with the gaiety of despair, were jumping up and down on their stocking-feet or barefoot; others tied up their clothes and sat down on the bundles and were sad as death. Others again leant or stood against the walls, like carved saints, with the cold sweat on their foreheads. One might say even of the dwarfs and cripples that their hearts sank into their trousers, had they still had their trousers on! I walked round the hall, meaning well by everybody, but caring to talk to none. They were surprised that I could keep so indifferent; of the great excitement bubbling inside me I gave no sign. Suddenly the entrance-door was locked, which made one of us whisper: “Look, the trap’s snapped to!” On the other hand, a door opposite opened; and a couple of soldiers—but these were full-blown soldiers—walked about among us and pushed one after the other into the inner room. I then saw some of the palest faces I ever beheld in my life. Most of them, however, strode quite bravely through the fateful gate. But we were numbered. To prevent unfairness in any given age-class, the order of the muster—for it is usually to the recruit’s advantage to be one of the last—the order is always arranged, a few weeks beforehand, by lot, which every man liable to military service can draw in person or allow to be drawn by such persons as he pleases. My number had been drawn by the Krieglach Town Council; and it bore the favourable number of 67. Nearly half of the numbers up to 30 did not come back. A sergeant fetched their clothes. But those who did come back wore an all the gladder look, dressed themselves as quickly as they could, or, for fear lest the gentleman inside should repent of having let them go, bundled their clothes under their arms and slipped out through some hole or other.
zurück zum  Buch The Forest Farm - Tales of the Austrian Tyrol"
The Forest Farm Tales of the Austrian Tyrol