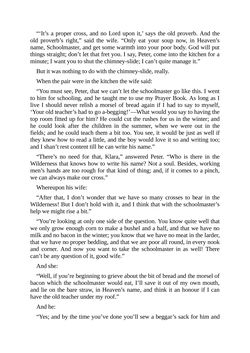 “‘It’s a proper cross, and no Lord upon it,’ says the old proverb. And the old proverb’s right,” said the wife. “Only eat your soup now, in Heaven’s name, Schoolmaster, and get some warmth into your poor body. God will put things straight; don’t let that fret you. I say, Peter, come into the kitchen for a minute; I want you to shut the chimney-slide; I can’t quite manage it.” But it was nothing to do with the chimney-slide, really. When the pair were in the kitchen the wife said: “You must see, Peter, that we can’t let the schoolmaster go like this. I went to him for schooling, and he taught me to use my Prayer Book. As long as I live I should never relish a morsel of bread again if I had to say to myself, ‘Your old teacher’s had to go a-begging!’—What would you say to having the top room fitted up for him? He could cut the rushes for us in the winter; and he could look after the children in the summer, when we were out in the fields; and he could teach them a bit too. You see, it would be just as well if they knew how to read a little, and the boy would love it so and writing too; and I shan’t rest content till he can write his name.” “There’s no need for that, Klara,” answered Peter. “Who is there in the Wilderness that knows how to write his name? Not a soul. Besides, working men’s hands are too rough for that kind of thing; and, if it comes to a pinch, we can always make our cross.” Whereupon his wife: “After that, I don’t wonder that we have so many crosses to bear in the Wilderness! But I don’t hold with it, and I think that with the schoolmaster’s help we might rise a bit.” “You’re looking at only one side of the question. You know quite well that we only grow enough corn to make a bushel and a half, and that we have no milk and no bacon in the winter; you know that we have no meat in the larder, that we have no proper bedding, and that we are poor all round, in every nook and corner. And now you want to take the schoolmaster in as well! There can’t be any question of it, good wife.” And she: “Well, if you’re beginning to grieve about the bit of bread and the morsel of bacon which the schoolmaster would eat, I’ll save it out of my own mouth, and lie on the bare straw, in Heaven’s name, and think it an honour if I can have the old teacher under my roof.” And he: “Yes; and by the time you’ve done you’ll sew a beggar’s sack for him and
zurück zum  Buch The Forest Farm - Tales of the Austrian Tyrol"
The Forest Farm Tales of the Austrian Tyrol