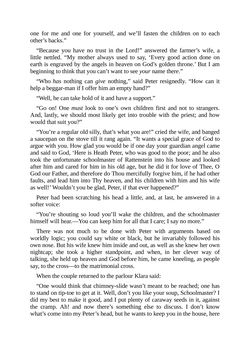 one for me and one for yourself, and we’ll fasten the children on to each other’s backs.” “Because you have no trust in the Lord!” answered the farmer’s wife, a little nettled. “My mother always used to say, ‘Every good action done on earth is engraved by the angels in heaven on God’s golden throne.’ But I am beginning to think that you can’t want to see your name there.” “Who has nothing can give nothing,” said Peter resignedly. “How can it help a beggar-man if I offer him an empty hand?” “Well, he can take hold of it and have a support.” “Go on! One must look to one’s own children first and not to strangers. And, lastly, we should most likely get into trouble with the priest; and how would that suit you?” “You’re a regular old silly, that’s what you are!” cried the wife, and banged a saucepan on the stove till it rang again. “It wants a special grace of God to argue with you. How glad you would be if one day your guardian angel came and said to God, ‘Here is Heath Peter, who was good to the poor; and he also took the unfortunate schoolmaster of Rattenstein into his house and looked after him and cared for him in his old age, but he did it for love of Thee, O God our Father, and therefore do Thou mercifully forgive him, if he had other faults, and lead him into Thy heaven, and his children with him and his wife as well!’ Wouldn’t you be glad, Peter, if that ever happened?” Peter had been scratching his head a little, and, at last, he answered in a softer voice: “You’re shouting so loud you’ll wake the children, and the schoolmaster himself will hear.—You can keep him for all that I care; I say no more.” There was not much to be done with Peter with arguments based on worldly logic; you could say white or black, but he invariably followed his own nose. But his wife knew him inside and out, as well as she knew her own nightcap; she took a higher standpoint, and when, in her clever way of talking, she held up heaven and God before him, he came kneeling, as people say, to the cross—to the matrimonial cross. When the couple returned to the parlour Klara said: “One would think that chimney-slide wasn’t meant to be reached; one has to stand on tip-toe to get at it. Well, don’t you like your soup, Schoolmaster? I did my best to make it good, and I put plenty of caraway seeds in it, against the cramp. Ah! and now there’s something else to discuss. I don’t know what’s come into my Peter’s head, but he wants to keep you in the house, here
zurück zum  Buch The Forest Farm - Tales of the Austrian Tyrol"
The Forest Farm Tales of the Austrian Tyrol