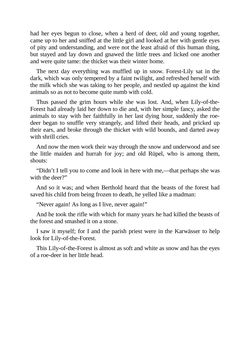 had her eyes begun to close, when a herd of deer, old and young together, came up to her and sniffed at the little girl and looked at her with gentle eyes of pity and understanding, and were not the least afraid of this human thing, but stayed and lay down and gnawed the little trees and licked one another and were quite tame: the thicket was their winter home. The next day everything was muffled up in snow. Forest-Lily sat in the dark, which was only tempered by a faint twilight, and refreshed herself with the milk which she was taking to her people, and nestled up against the kind animals so as not to become quite numb with cold. Thus passed the grim hours while she was lost. And, when Lily-of-the- Forest had already laid her down to die and, with her simple fancy, asked the animals to stay with her faithfully in her last dying hour, suddenly the roe- deer began to snuffle very strangely, and lifted their heads, and pricked up their ears, and broke through the thicket with wild bounds, and darted away with shrill cries. And now the men work their way through the snow and underwood and see the little maiden and hurrah for joy; and old Rüpel, who is among them, shouts: “Didn’t I tell you to come and look in here with me,—that perhaps she was with the deer?” And so it was; and when Berthold heard that the beasts of the forest had saved his child from being frozen to death, he yelled like a madman: “Never again! As long as I live, never again!” And he took the rifle with which for many years he had killed the beasts of the forest and smashed it on a stone. I saw it myself; for I and the parish priest were in the Karwässer to help look for Lily-of-the-Forest. This Lily-of-the-Forest is almost as soft and white as snow and has the eyes of a roe-deer in her little head.
zurück zum  Buch The Forest Farm - Tales of the Austrian Tyrol"
The Forest Farm Tales of the Austrian Tyrol