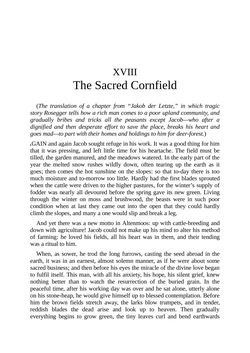 XVIII The Sacred Cornfield (The translation of a chapter from “Jakob der Letzte,” in which tragic story Rosegger tells how a rich man comes to a poor upland community, and gradually bribes and tricks all the peasants except Jacob—who after a dignified and then desperate effort to save the place, breaks his heart and goes mad—to part with their homes and holdings to him for deer-forest.) AGAIN and again Jacob sought refuge in his work. It was a good thing for him that it was pressing, and left little time for his heartache. The field must be tilled, the garden manured, and the meadows watered. In the early part of the year the melted snow rushes wildly down, often tearing up the earth as it goes; then comes the hot sunshine on the slopes: so that to-day there is too much moisture and to-morrow too little. Hardly had the first blades sprouted when the cattle were driven to the higher pastures, for the winter’s supply of fodder was nearly all devoured before the spring gave its new green. Living through the winter on moss and brushwood, the beasts were in such poor condition when at last they came out into the open that they could hardly climb the slopes, and many a one would slip and break a leg. And yet there was a new motto in Altenmoos: up with cattle-breeding and down with agriculture! Jacob could not make up his mind to alter his method of farming: he loved his fields, all his heart was in them, and their tending was a ritual to him. When, as sower, he trod the long furrows, casting the seed abroad in the earth, it was in an earnest, almost solemn manner, as if he were about some sacred business; and then before his eyes the miracle of the divine love began to fulfil itself. This man, with all his anxiety, his hope, his silent grief, knew nothing better than to watch the resurrection of the buried grain. In the peaceful time, after his working day was over and he sat alone, utterly alone on his stone-heap, he would give himself up to blessed contemplation. Before him the brown fields stretch away, the larks blow trumpets, and in tender, reddish blades the dead arise and look up to heaven. Then gradually everything begins to grow green, the tiny leaves curl and bend earthwards
zurück zum  Buch The Forest Farm - Tales of the Austrian Tyrol"
The Forest Farm Tales of the Austrian Tyrol