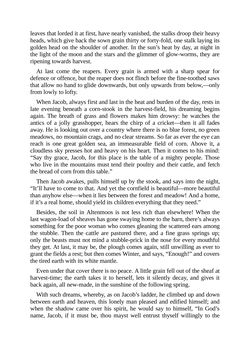 leaves that lorded it at first, have nearly vanished, the stalks droop their heavy heads, which give back the sown grain thirty or forty-fold, one stalk laying its golden head on the shoulder of another. In the sun’s heat by day, at night in the light of the moon and the stars and the glimmer of glow-worms, they are ripening towards harvest. At last come the reapers. Every grain is armed with a sharp spear for defence or offence, but the reaper does not flinch before the fine-toothed saws that allow no hand to glide downwards, but only upwards from below,—only from lowly to lofty. When Jacob, always first and last in the heat and burden of the day, rests in late evening beneath a corn-stook in the harvest-field, his dreaming begins again. The breath of grass and flowers makes him drowsy: he watches the antics of a jolly grasshopper, hears the chirp of a cricket—then it all fades away. He is looking out over a country where there is no blue forest, no green meadows, no mountain crags, and no clear streams. So far as ever the eye can reach is one great golden sea, an immeasurable field of corn. Above it, a cloudless sky presses hot and heavy on his heart. Then it comes to his mind: “Say thy grace, Jacob, for this place is the table of a mighty people. Those who live in the mountains must tend their poultry and their cattle, and fetch the bread of corn from this table.” Then Jacob awakes, pulls himself up by the stook, and says into the night, “It’ll have to come to that. And yet the cornfield is beautiful—more beautiful than anyhow else—when it lies between the forest and meadow! And a home, if it’s a real home, should yield its children everything that they need.” Besides, the soil in Altenmoos is not less rich than elsewhere! When the last wagon-load of sheaves has gone swaying home to the barn, there’s always something for the poor woman who comes gleaning the scattered ears among the stubble. Then the cattle are pastured there, and a fine grass springs up; only the beasts must not mind a stubble-prick in the nose for every mouthful they get. At last, it may be, the plough comes again, still unwilling as ever to grant the fields a rest; but then comes Winter, and says, “Enough!” and covers the tired earth with its white mantle. Even under that cover there is no peace. A little grain fell out of the sheaf at harvest-time; the earth takes it to herself, lets it silently decay, and gives it back again, all new-made, in the sunshine of the following spring. With such dreams, whereby, as on Jacob’s ladder, he climbed up and down between earth and heaven, this lonely man pleased and edified himself; and when the shadow came over his spirit, he would say to himself, “In God’s name, Jacob, if it must be, thou mayst well entrust thyself willingly to the
zurück zum  Buch The Forest Farm - Tales of the Austrian Tyrol"
The Forest Farm Tales of the Austrian Tyrol