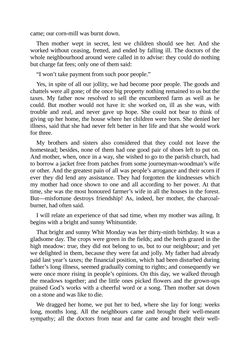 came; our corn-mill was burnt down. Then mother wept in secret, lest we children should see her. And she worked without ceasing, fretted, and ended by falling ill. The doctors of the whole neighbourhood around were called in to advise: they could do nothing but charge fat fees; only one of them said: “I won’t take payment from such poor people.” Yes, in spite of all our jollity, we had become poor people. The goods and chattels were all gone; of the once big property nothing remained to us but the taxes. My father now resolved to sell the encumbered farm as well as he could. But mother would not have it: she worked on, ill as she was, with trouble and zeal, and never gave up hope. She could not bear to think of giving up her home, the house where her children were born. She denied her illness, said that she had never felt better in her life and that she would work for three. My brothers and sisters also considered that they could not leave the homestead; besides, none of them had one good pair of shoes left to put on. And mother, when, once in a way, she wished to go to the parish church, had to borrow a jacket free from patches from some journeyman-woodman’s wife or other. And the greatest pain of all was people’s arrogance and their scorn if ever they did lend any assistance. They had forgotten the kindnesses which my mother had once shown to one and all according to her power. At that time, she was the most honoured farmer’s wife in all the houses in the forest. But—misfortune destroys friendship! As, indeed, her mother, the charcoal- burner, had often said. I will relate an experience of that sad time, when my mother was ailing. It begins with a bright and sunny Whitsuntide. That bright and sunny Whit Monday was her thirty-ninth birthday. It was a gladsome day. The crops were green in the fields; and the herds grazed in the high meadow: true, they did not belong to us, but to our neighbour; and yet we delighted in them, because they were fat and jolly. My father had already paid last year’s taxes; the financial position, which had been disturbed during father’s long illness, seemed gradually coming to rights; and consequently we were once more rising in people’s opinions. On this day, we walked through the meadows together; and the little ones picked flowers and the grown-ups praised God’s works with a cheerful word or a song. Then mother sat down on a stone and was like to die. We dragged her home, we put her to bed, where she lay for long: weeks long, months long. All the neighbours came and brought their well-meant sympathy; all the doctors from near and far came and brought their well-
zurück zum  Buch The Forest Farm - Tales of the Austrian Tyrol"
The Forest Farm Tales of the Austrian Tyrol