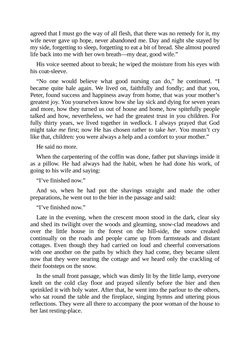 agreed that I must go the way of all flesh, that there was no remedy for it, my wife never gave up hope, never abandoned me. Day and night she stayed by my side, forgetting to sleep, forgetting to eat a bit of bread. She almost poured life back into me with her own breath—my dear, good wife.” His voice seemed about to break; he wiped the moisture from his eyes with his coat-sleeve. “No one would believe what good nursing can do,” he continued. “I became quite hale again. We lived on, faithfully and fondly; and that you, Peter, found success and happiness away from home, that was your mother’s greatest joy. You yourselves know how she lay sick and dying for seven years and more, how they turned us out of house and home, how spitefully people talked and how, nevertheless, we had the greatest trust in you children. For fully thirty years, we lived together in wedlock. I always prayed that God might take me first; now He has chosen rather to take her. You mustn’t cry like that, children: you were always a help and a comfort to your mother.” He said no more. When the carpentering of the coffin was done, father put shavings inside it as a pillow. He had always had the habit, when he had done his work, of going to his wife and saying: “I’ve finished now.” And so, when he had put the shavings straight and made the other preparations, he went out to the bier in the passage and said: “I’ve finished now.” Late in the evening, when the crescent moon stood in the dark, clear sky and shed its twilight over the woods and gleaming, snow-clad meadows and over the little house in the forest on the hill-side, the snow creaked continually on the roads and people came up from farmsteads and distant cottages. Even though they had carried on loud and cheerful conversations with one another on the paths by which they had come, they became silent now that they were nearing the cottage and we heard only the crackling of their footsteps on the snow. In the small front passage, which was dimly lit by the little lamp, everyone knelt on the cold clay floor and prayed silently before the bier and then sprinkled it with holy water. After that, he went into the parlour to the others, who sat round the table and the fireplace, singing hymns and uttering pious reflections. They were all there to accompany the poor woman of the house to her last resting-place.
zurück zum  Buch The Forest Farm - Tales of the Austrian Tyrol"
The Forest Farm Tales of the Austrian Tyrol