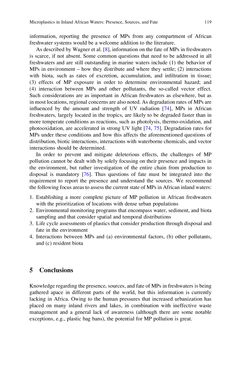 information, reporting the presence of MPs from any compartment of African freshwater systemswouldbe awelcomeaddition to the literature. AsdescribedbyWagneretal. [8], informationon the fateofMPs in freshwaters is scarce, if not absent. Some common questions that need to be addressed in all freshwaters and are still outstanding inmarinewaters include (1) the behavior of MPs in environment – how they distribute andwhere they settle; (2) interactions with biota, such as rates of excretion, accumulation, and infiltration in tissue; (3) effects of MP exposure in order to determine environmental hazard; and (4) interaction between MPs and other pollutants, the so-called vector effect. Such considerations are as important in African freshwaters as elsewhere, but as inmost locations, regionalconcernsarealsonoted.AsdegradationratesofMPsare influenced by the amount and strength of UV radiation [74], MPs in African freshwaters, largely located in the tropics, are likely to be degraded faster than in more temperate conditions as reactions, such as photolysis, thermo-oxidation, and photooxidation, are accelerated in strongUV light [74, 75].Degradation rates for MPs under these conditions and how this affects the aforementioned questions of distribution,biotic interactions, interactionswithwaterbornechemicals, andvector interactions shouldbedetermined. In order to prevent and mitigate deleterious effects, the challenges of MP pollution cannot be dealtwith by solely focusingon their presence and impacts in the environment, but rather investigation of the entire chain from production to disposal is mandatory [76]. Thus questions of fate must be integrated into the requirement to report the presence and understand the sources. We recommend thefollowingfocusareastoassess thecurrentstateofMPsinAfricaninlandwaters: 1. Establishing a more complete picture ofMP pollution in African freshwaters with the prioritizationof locationswith dense urbanpopulations 2. Environmentalmonitoringprograms that encompasswater, sediment, andbiota sampling and that consider spatial and temporal distributions 3. Lifecycleassessmentsofplastics that considerproduction throughdisposal and fate in the environment 4. Interactions betweenMPs and (a) environmental factors, (b) other pollutants, and (c) resident biota 5 Conclusions Knowledgeregardingthepresence, sources,andfateofMPsinfreshwaters isbeing gathered apace in different parts of the world, but this information is currently lacking in Africa. Owing to the human pressures that increased urbanization has placed on many inland rivers and lakes, in combination with ineffective waste management and a general lack of awareness (although there are some notable exceptions, e.g., plastic bagbans), the potential forMPpollution is great. Microplastics in InlandAfricanWaters: Presence, Sources, andFate 119
zurück zum  Buch Freshwater Microplastics - Emerging Environmental Contaminants?"
Freshwater Microplastics Emerging Environmental Contaminants?