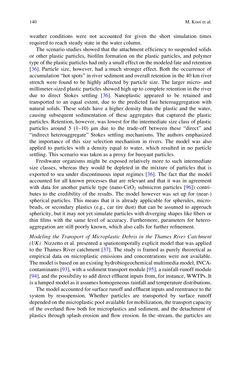 weather conditions were not accounted for given the short simulation times required to reach steady state in thewater column. The scenario studies showed that the attachment efficiency to suspended solids or other plastic particles, biofilm formation on the plastic particles, and polymer typeof theplasticparticleshadonlyasmalleffectonthemodeledfateandretention [36]. Particle size, however, had amuch stronger effect. Both the occurrence of accumulation“hot spots” in river sediment andoverall retention in the40kmriver stretch were found to be highly affected by particle size. The larger micro- and millimeter-sizedplasticparticles showedhighup tocomplete retention in the river due to direct Stokes settling [36]. Nanoplastic appeared to be retained and transported to an equal extent, due to the predicted fast heteroaggregation with natural solids. These solids have a higher density than the plastic and the water, causing subsequent sedimentation of these aggregates that captured the plastic particles.Retention, however,was lowest for the intermediate size class of plastic particles around 5 (1–10) μm due to the trade-off between these “direct” and “indirect heteroaggregate” Stokes settling mechanisms. The authors emphasized the importance of this size selection mechanism in rivers. The model was also applied to particles with a density equal to water, which resulted in no particle settling.This scenariowas taken as a proxy for buoyant particles. Freshwater organisms might be exposed relatively more to such intermediate size classes, whereas they would be depleted in the mixture of particles that is exported to sea under discontinuous input regimes [36]. The fact that the model accounted for all known processes that are relevant and that it was in agreement with data for another particle type (nano-CeO2 submicron particles [96]) contri- butes to the credibility of the results. Themodel however was set up for (near-) spherical particles. This means that it is already applicable for spherules, micro- beads, or secondary plastics (e.g., car tire dust) that can be assumed to approach sphericity, but itmaynotyet simulateparticleswithdivergingshapes likefibersor thin films with the same level of accuracy. Furthermore, parameters for hetero- aggregation are still poorly known,which also calls for further refinement. Modeling the Transport of Microplastic Debris in the Thames River Catchment (UK) Nizzetto et al. presented a spatiotemporally explicitmodel thatwas applied to theThamesRiver catchment [37]. The study is framed as purely theoretical as empirical data on microplastic emissions and concentrations were not available. Themodel isbasedonanexistinghydrobiogeochemicalmultimediamodel, INCA- contaminants [93],witha sediment transportmodule [95], a rainfall-runoffmodule [94], and thepossibility toadddirect effluent inputs from, for instance,WWTPs. It isa lumpedmodelas itassumeshomogeneousrainfalland temperaturedistributions. Themodelaccountedforsurface runoffandeffluent inputsandreentrance to the system by resuspension. Whether particles are transported by surface runoff dependedonthemicroplasticpoolavailableformobilization, the transportcapacity of the overland flow both formicroplastics and sediment, and the detachment of plastics through splash erosion and flow erosion. In the stream, the particles are 140 M.Kooi et al.
zurück zum  Buch Freshwater Microplastics - Emerging Environmental Contaminants?"
Freshwater Microplastics Emerging Environmental Contaminants?