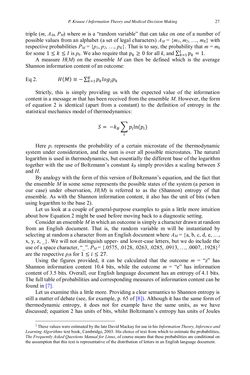 triple (m, AM, PM) where m is a “random variable” that can take on one of a number of possible values from an alphabet (a set of legal characters) AM = {m1, m2, …, mK} with respective probabilities PM = {p1, p2, …, pK}. That is to say, the probability that m = mk for some ͳ൑ ݇൑ ܫ is pk. We also require that ݌ ௞ ൒ Ͳ for all k, and σ ݌ ௞ ൌͳூ௞ ୀଵ . A measure H(M) on the ensemble M can then be defined which is the average Shannon information content of an outcome: Eq 2. ܪሺܯሻؠെσ ݌ ௞ ݈݋ ݃ଶ݌ ௞ ௄ ௞ ୀଵ Strictly, this is simply providing us with the expected value of the information content in a message m that has been received from the ensemble M. However, the form of equation 2 is identical (apart from a constant) to the definition of entropy in the statistical mechanics model of thermodynamics: ܵൌ െ݇஻ ෍ ݌ ௜   ሺ݌ ௜ ሻ ௜ Here pi represents the probability of a certain microstate of the thermodynamic system under consideration, and the sum is over all possible microstates. The natural logarithm is used in thermodynamics, but essentially the different base of the logarithm together with the use of Boltzmann’s constant kB simply provides a scaling between S and H. By analogy with the form of this version of Boltzmann’s equation, and the fact that the ensemble M in some sense represents the possible states of the system (a person in our case) under observation, H(M) is referred to as the (Shannon) entropy of that ensemble. As with the Shannon information content, it also has the unit of bits (when using logarithm to the base 2). Let us look at a couple of general-purpose examples to gain a little more intuition about how Equation 2 might be used before moving back to a diagnostic setting. Consider an ensemble M in which an outcome is simply a character drawn at random from an English document. That is, the random variable m will be instantiated by selecting at random a character from an English document where AM = {a, b, c, d, e, …, x, y, z, _}. We will not distinguish upper- and lower-case letters, but we do include the use of a space character, “_”. PM = {.0575, .0128, .0263, .0285, .0913, …, .0007, .1928}2 are the respective pis for ͳ൑ ݅൑ ʹ͹ . Using the figures provided, it can be calculated that the outcome m = “z” has Shannon information content 10.4 bits, while the outcome m = “e” has information content of 3.5 bits. Overall, our English language document has an entropy of 4.1 bits. The full table of probabilities and corresponding measures of information content can be found in [7]. Let us examine this a little more. Providing a clear semantics to Shannon entropy is still a matter of debate (see, for example, p. 65 of [8]). Although it has the same form of thermodynamic entropy, it does not for example have the same units, as we have discussed; equation 2 has units of bits, whilst Boltzmann’s entropy has units of Joules 2 These values were estimated by the late David Mackay for use in his Information Theory, Inference and Learning Algorithms text book, Cambridge, 2003. His choice of text from which to estimate the probabilities, The Frequently Asked Questions Manual for Linux, of course means that these probabilities are conditional on the assumption that this text is representative of the distribution of letters in an English language document. P.Krause / InformationTheoryandMedicalDecisionMaking 27
zurück zum  Buch Applied Interdisciplinary Theory in Health Informatics - Knowledge Base for Practitioners"
Applied Interdisciplinary Theory in Health Informatics Knowledge Base for Practitioners