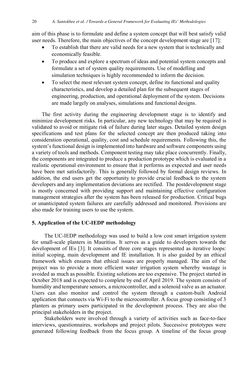 aim of this phase is to formulate and define a system concept that will best satisfy valid user needs. Therefore, the main objectives of the concept development stage are [17]: To establish that there are valid needs for a new system that is technically and economically feasible. To produce and explore a spectrum of ideas and potential system concepts and formulate a set of system quality requirements. Use of modelling and simulation techniques is highly recommended to inform the decision. To select the most relevant system concept, define its functional and quality characteristics, and develop a detailed plan for the subsequent stages of engineering, production, and operational deployment of the system. Decisions are made largely on analyses, simulations and functional designs. The first activity during the engineering development stage is to identify and minimize development risks. In particular, any new technology that may be required is validated to avoid or mitigate risk of failure during later stages. Detailed system design specifications and test plans for the selected concept are then produced taking into consideration operational, quality, cost and schedule requirements. Following this, the system’s functional design is implemented into hardware and software components using a variety of tools and methods. Component testing may take place concurrently. Finally, the components are integrated to produce a production prototype which is evaluated in a realistic operational environment to ensure that it performs as expected and user needs have been met satisfactorily. This is generally followed by formal design reviews. In addition, the end users get the opportunity to provide crucial feedback to the system developers and any implementation deviations are rectified. The postdevelopment stage is mostly concerned with providing support and maintaining effective configuration management strategies after the system has been released for production. Critical bugs or unanticipated system failures are carefully addressed and monitored. Provisions are also made for training users to use the system. 5. Application of the UC-IEDP methodology The UC-IEDP methodology was used to build a low cost smart irrigation system for small-scale planters in Mauritius. It serves as a guide to developers towards the development of IEs [3]. It consists of three core stages represented as iterative loops: initial scoping, main development and IE installation. It is also guided by an ethical framework which ensures that ethical issues are properly managed. The aim of the project was to provide a more efficient water irrigation system whereby wastage is avoided as much as possible. Existing solutions are too expensive. The project started in October 2018 and is expected to complete by end of April 2019. The system consists of humidity and temperature sensors, a microcontroller, and a solenoid valve as an actuator. Users can also monitor and control the system through a custom-built Android application that connects via Wi-Fi to the microcontroller. A focus group consisting of 3 planters as primary users participated in the development process. They are also the principal stakeholders in the project. Stakeholders were involved through a variety of activities such as face-to-face interviews, questionnaires, workshops and project pilots. Successive prototypes were generated following feedback from the focus group. A timeline of the focus group A.Santokheeetal. /TowardsaGeneralFramework forEvaluating IEs’Methodologies20
zurück zum  Buch Intelligent Environments 2019 - Workshop Proceedings of the 15th International Conference on Intelligent Environments"
Intelligent Environments 2019 Workshop Proceedings of the 15th International Conference on Intelligent Environments