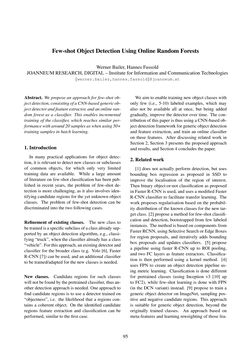 Few-shotObjectDetectionUsingOnlineRandomForests WernerBailer,HannesFassold JOANNEUMRESEARCH,DIGITAL–Institute for InformationandCommunicationTechnologies {werner.bailer,hannes.fassold}@joanneum.at Abstract. We propose an approach for few-shot ob- jectdetection,consistingofaCNN-basedgenericob- jectdetectorandfeatureextractor,andanonlineran- dom forest as a classifier. This enables incremental training of the classifier, which reaches similar per- formancewitharound20samplesaswhenusing50+ training samples inbatch learning. 1. Introduction In many practical applications for object detec- tion, it is relevant to detect new classes or subclasses of common objects, for which only very limited training data are available. While a large amount of literature on few-shot classification has been pub- lished in recent years, the problem of few-shot de- tection is more challenging, as it also involves iden- tifying candidate regions for the yet unknown object classes. The problem of few-shot detection can be discriminated into the twofollowingcases. Refinement of existing classes. The new class to betrainedisaspecificsubclassofaclassalreadysup- ported by an object detection algorithm, e.g., classi- fying “truck”, when the classifier already has a class “vehicle”. For thisapproach,anexistingdetectorand classifier for the broader class (e.g. Yolo [6], Faster R-CNN [7]) can be used, and an additional classifier tobe trained/adapted for thenewclasses isneeded. New classes. Candidate regions for such classes willnotbefoundbythepretrainedclassifier, thusan- otherdetectionapproach isneeded. Oneapproach to find candidate regions is to use a detector trained on “objectness”, i.e. the likelihood that a regions con- tains a coherent object. On the identified candidate regions feature extraction and classification can be performed, similar to thefirst case. We aimto enable training newobject classes with only few (i.e., 5-10) labeled examples, which may also not be available all at once, but being added gradually, improve the detector over time. The con- tributionof thispaper is thususingaCNN-basedob- jectdetectionframeworkforgenericobjectdetection and feature extraction, and train an online classifier on these features. After discussing related work in Section 2, Section 3 presents the proposed approach and results, andSection4concludes thepaper. 2.Relatedwork [1] does not actually perform detection, but uses bounding box regression as proposed in SSD to improve the localisation of the region of interest. Then binary object-or-not classification as proposed in Faster R-CNN is used, and uses a modified Faster R-CNN classifier to facilitate transfer learning. The work proposes regularisation based on the probabil- ity distribution of the known classes for the new tar- get class. [2] propose a method for few-shot classifi- cation and detection, bootstrapped from few labeled instances. The method is based on components from FasterRCNN,usingSelectiveSearchorEdgeBoxes for region proposals, and iteratively adds bounding box proposals and updates classifiers. [5] propose a pipeline using faster R-CNN up to ROI pooling, and two FC layers as feature extractors. Classifica- tion is then performed using a kernel method. [4] uses FPN to create an object detection pipeline us- ing metric learning. Classification is done different for pretrained classes (using Inception v3 [10] up to FC2), while few-shot learning is done with FPN (in the DCN variant) instead. [9] propose to train a generic object detector on ImageNet, sampling pos- itive and negative candidate regions. This approach is suitable for generic object detection, beyond the originally trained classes. An approach based on meta-features and learning reweighting of those fea- 95
zurück zum  Buch Joint Austrian Computer Vision and Robotics Workshop 2020"
Joint Austrian Computer Vision and Robotics Workshop 2020