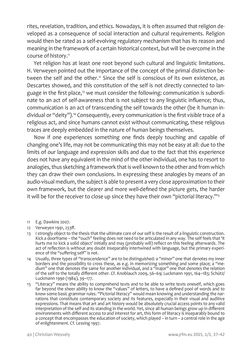 40 | Christian Wessely www.jrfm.eu 2015, 1/1, 37–42 rites, revelation, tradition, and ethics. Nowadays, it is often assumed that religion de- veloped as a consequence of social interaction and cultural requirements. religion would then be rated as a self-evolving regulatory mechanism that has its reason and meaning in the framework of a certain historical context, but will be overcome in the course of history.11 yet religion has at least one root beyond such cultural and linguistic limitations. h. Verweyen pointed out the importance of the concept of the primal distinction be- tween the self and the other.12 since the self is conscious of its own existence, as Descartes showed, and this constitution of the self is not directly connected to lan- guage in the first place,13 we must consider the following: communication is subordi- nate to an act of self-awareness that is not subject to any linguistic influence; thus, communication is an act of transcending the self towards the other (be it human in- dividual or “deity”).14 Consequently, every communication is the first visible trace of a religious act, and since humans cannot exist without communicating, these religious traces are deeply embedded in the nature of human beings themselves. Now if one experiences something one finds deeply touching and capable of changing one’s life, may not be communicating this may not be easy at all: due to the limits of our language and expression skills and due to the fact that this experience does not have any equivalent in the mind of the other individual, one has to resort to analogies, thus sketching a framework that is well known to the other and from which they can draw their own conclusions. in expressing these analogies by means of an audio-visual medium, the subject is able to present a very close approximation to their own framework, but the clearer and more well-defined the picture gets, the harder it will be for the receiver to close up since they have their own “pictorial literacy.”15 11 e.g. Dawkins 2007. 12 Verweyen 1991, 233ff. 13 I strongly object to the thesis that the ultimate core of our self is the result of a linguistic construction. Kick a doorframe – the “ouch” feeling does not need to be articulated in any way. The self feels that ‘it hurts me to kick a solid object’ initially and may (probably will) reflect on this feeling afterwards. The act of reflection is without any doubt inseparably intertwined with language, but the primary experi- ence of the “suffering self” is not. 14 Usually, three types of “transcendence” are to be distinguished: a “minor” one that denotes my inner borders and the possibility to cross these, as e.g. in memorizing something and some place; a “me- dium” one that denotes the same for another individual, and a “major” one that denotes the relation of the self to the totally different other. Cf. Knoblauch 2009, 56–69; Luckmann 1991, 164–183; Schütz/ luckmann 1990 (1984), 39–177. 15 “literacy” means the ability to comprehend texts and to be able to write texts oneself, which goes far beyond the sheer ability to know the “values” of letters, to have a defined pool of words and to know some basic grammar rules. “Pictorial literacy” would mean knowing and understanding the nar- rations that constitute contemporary society and its features, especially in their visual and auditive expressions. That means that art and art history would be absolutely crucial access points to any valid interpretation of the self and its standing in the world. Yet, since all human beings grow up in different environments with different access to and interest for art, this form of literacy is inseparably bound to a concept that encompasses the education of society, which played – in turn – a central role in the age of enlightenment. Cf. lessing 1997.
zurück zum  Buch JRFM - Journal Religion Film Media, Band 01/01"
JRFM Journal Religion Film Media, Band 01/01