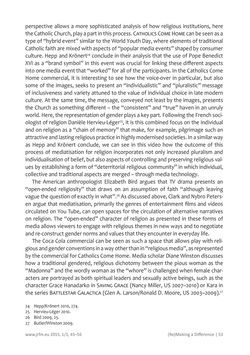 (Re)Making a Difference | 53www.jrfm.eu 2015, 1/1, 45–56 perspective allows a more sophisticated analysis of how religious institutions, here the Catholic Church, play a part in this process. Catholics Come Home can be seen as a type of “hybrid event” similar to the World youth Day, where elements of traditional Catholic faith are mixed with aspects of “popular media events” shaped by consumer culture. hepp and Krönert24 conclude in their analysis that the use of Pope Benedict XVI as a “brand symbol” in this event was crucial for linking these different aspects into one media event that “worked” for all of the participants. in the Catholics Come home commercial, it is interesting to see how the voice-over in particular, but also some of the images, seeks to present an “individualistic” and “pluralistic” message of inclusiveness and variety attuned to the value of individual choice in late modern culture. at the same time, the message, conveyed not least by the images, presents the Church as something different – the “consistent” and “true” haven in an unruly world. here, the representation of gender plays a key part. following the french soci- ologist of religion Danièle hervieu-léger25, it is this combined focus on the individual and on religion as a “chain of memory” that make, for example, pilgrimage such an attractive and lasting religious practice in highly modernised societies. in a similar way as hepp and Krönert conclude, we can see in this video how the outcome of this process of mediatisation for religion incorporates not only increased pluralism and individualisation of belief, but also aspects of controlling and preserving religious val- ues by establishing a form of “deterritorial religious community” in which individual, collective and traditional aspects are merged – through media technology. The american anthropologist elizabeth Bird argues that TV drama presents an “open-ended religiosity” that draws on an assumption of faith “although leaving vague the question of exactly in what”.26 as discussed above, Clark and Nybro Peters- en argue that mediatisation, primarily the genres of entertainment films and videos circulated on you Tube, can open spaces for the circulation of alternative narratives on religion. The “open-ended” character of religion as presented in these forms of media allows viewers to engage with religious themes in new ways and to negotiate and re-construct gender norms and values that they encounter in everyday life. The Coca Cola commercial can be seen as such a space that allows play with reli- gious and gender conventions in a way other than in “religious media”, as represented by the commercial for Catholics Come home. Media scholar Diane Winston discusses how a traditional gendered, religious dichotomy between the pious woman as the “Madonna” and the wordly woman as the “whore” is challenged when female char- acters are portrayed as both spiritual leaders and sexually active beings, such as the character Grace hanadarko in Saving Grace (Nancy Miller, Us 2007–2010) or Kara in the series Battlestar Galactica (Glen a. larson/ronald D. Moore, Us 2003–2009).27 24 hepp/Krönert 2010, 274. 25 hervieu-léger 2010. 26 Bird 2009, 25. 27 Butler/Winston 2009.
zurück zum  Buch JRFM - Journal Religion Film Media, Band 01/01"
JRFM Journal Religion Film Media, Band 01/01