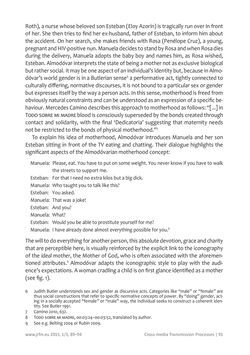 Cross-media Transmission Processes | 91www.jrfm.eu 2015, 1/1, 89–94 roth), a nurse whose beloved son esteban (eloy azorín) is tragically run over in front of her. She then tries to find her ex-husband, father of Esteban, to inform him about the accident. On her search, she makes friends with rosa (Penélope Cruz), a young, pregnant and hiV-positive nun. Manuela decides to stand by rosa and when rosa dies during the delivery, Manuela adopts the baby boy and names him, as rosa wished, esteban. almodóvar interprets the state of being a mother not as exclusive biological but rather social. it may be one aspect of an individual’s identity but, because in almo- dóvar’s world gender is in a Butlerian sense6 a performative act, tightly connected to culturally differing, normative discourses, it is not bound to a particular sex or gender but expresses itself by the way a person acts. in this sense, motherhood is freed from obviously natural constraints and can be understood as an expression of a specific be- haviour. Mercedes Camino describes this approach to motherhood as follows: “[...] in Todo sobre mi madre blood is consciously superseded by the bonds created through contact and solidarity, with the final ‘Dedicatoria’ suggesting that maternity needs not be restricted to the bonds of physical motherhood.”7 To explain his idea of motherhood, almodóvar introduces Manuela and her son esteban sitting in front of the TV eating and chatting. Their dialogue highlights the significant aspects of the Almodóvarian motherhood concept: Manuela: Please, eat. you have to put on some weight. you never know if you have to walk the streets to support me. esteban: for that i need no extra kilos but a big dick. Manuela: Who taught you to talk like this? esteban: you asked. Manuela: That was a joke! esteban: and you? Manuela: What? esteban: Would you be able to prostitute yourself for me? Manuela: i have already done almost everything possible for you.8 The will to do everything for another person, this absolute devotion, grace and charity that are perceptible here, is visually reinforced by the explicit link to the iconography of the ideal mother, the Mother of God, who is often associated with the aforemen- tioned attributes.9 almodóvar adapts the iconographic style to play with the audi- ence’s expectations. A woman cradling a child is on first glance identified as a mother (see fig. 1). 6 Judith Butler understands sex and gender as discursive acts. Categories like “male” or “female” are thus social constructions that refer to specific normative concepts of power. By “doing” gender, act- ing in a socially accepted “female” or “male” way, the individual seeks to construct a coherent iden- tity. see Butler 1991. 7 Camino 2010, 632. 8 Todo sobre mi madre, 00:03:24–00:03:52, translated by author. 9 see e.g. Belting 2004 or rubin 2009.
zurück zum  Buch JRFM - Journal Religion Film Media, Band 01/01"
JRFM Journal Religion Film Media, Band 01/01