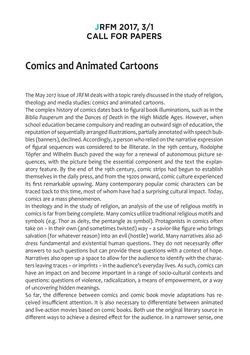 JRFM 2017, 3/1 CALL FOR PAPERS Comics and Animated Cartoons The May 2017 issue of JrfM deals with a topic rarely discussed in the study of religion, theology and media studies: comics and animated cartoons. The complex history of comics dates back to figural book illuminations, such as in the Biblia Pauperum and the Dances of Death in the high Middle ages. however, when school education became compulsory and reading an outward sign of education, the reputation of sequentially arranged illustrations, partially annotated with speech bub- bles (banners), declined. accordingly, a person who relied on the narrative expression of figural sequences was considered to be illiterate. In the 19th century, Rodolphe Töpfer and Wilhelm Busch paved the way for a renewal of autonomous picture se- quences, with the picture being the essential component and the text the explan- atory feature. By the end of the 19th century, comic strips had begun to establish themselves in the daily press, and from the 1920s onward, comic culture experienced its first remarkable upswing. Many contemporary popular comic characters can be traced back to this time, most of whom have had a surprising cultural impact. Today, comics are a mass phenomenon. in theology and in the study of religion, an analysis of the use of religious motifs in comics is far from being complete. Many comics utilize traditional religious motifs and symbols (e.g. Thor as deity, the pentangle as symbol). Protagonists in comics often take on – in their own (and sometimes twisted) way – a savior-like figure who brings salvation (for whatever reason) into an evil (hostile) world. Many narratives also ad- dress fundamental and existential human questions. They do not necessarily offer answers to such questions but can provide these questions with a context of hope. Narratives also open up a space to allow for the audience to identify with the charac- ters leaving traces – or imprints – in the audience’s everyday lives. as such, comics can have an impact on and become important in a range of socio-cultural contexts and questions: questions of violence, radicalization, a means of empowerment, or a way of uncovering hidden meanings. So far, the difference between comics and comic book movie adaptations has re- ceived insufficient attention. It is also necessary to differentiate between animated and live-action movies based on comic books. Both use the original literary source in different ways to achieve a desired effect for the audience. In a narrower sense, one
zurück zum  Buch JRFM - Journal Religion Film Media, Band 01/01"
JRFM Journal Religion Film Media, Band 01/01