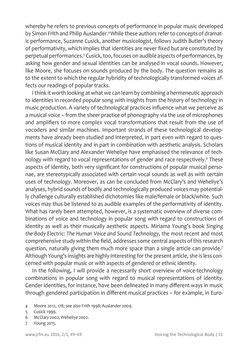 Voicing the Technological Body | 51www.jrfm.eu 2016, 2/1, 49–69 whereby he refers to previous concepts of performance in popular music developed by Simon Frith and Philip Auslander.4 While these authors refer to concepts of dramat- ic performance, Suzanne Cusick, another musicologist, follows Judith Butler’s theory of performativity, which implies that identities are never fixed but are constituted by perpetual performances.5 Cusick, too, focuses on audible aspects of performances, by asking how gender and sexual identities can be analysed in vocal sounds. However, like Moore, she focuses on sounds produced by the body. The question remains as to the extent to which the regular hybridity of technologically transformed voices af- fects our readings of popular tracks. I think it worth looking at what we can learn by combining a hermeneutic approach to identities in recorded popular song with insights from the history of technology in music production. A variety of technological practices influence what we perceive as a musical voice – from the sheer practice of phonography via the use of microphones and amplifiers to more complex vocal transformations that result from the use of vocoders and similar machines. Important strands of these technological develop- ments have already been studied and interpreted, in part even with regard to ques- tions of musical identity and in part in combination with aesthetic analysis. Scholars like Susan McClary and Alexander Weheliye have emphasised the relevance of tech- nology with regard to vocal representations of gender and race respectively.6 These aspects of identity, both very significant for constructions of popular musical perso- nae, are stereotypically associated with certain vocal sounds as well as with certain uses of technology. Moreover, as can be concluded from McClary’s and Weheliye’s analyses, hybrid sounds of bodily and technologically produced voices may potential- ly challenge culturally established dichotomies like male/female or black/white. Such voices may thus be listened to as audible examples of the performativity of identity. What has rarely been attempted, however, is a systematic overview of diverse com- binations of voice and technology in popular song with regard to constructions of identity as well as their musically aesthetic aspects. Miriama Young’s book Singing the Body Electric: The Human Voice and Sound Technology, the most recent and most comprehensive study within the field, addresses some central aspects of this research question, naturally giving them much more space than a single article can provide.7 Although Young’s insights are highly interesting for the present article, she is less con- cerned with popular music or with aspects of gendered or ethnic identity. In the following, I will provide a necessarily short overview of voice-technology combinations in popular song with regard to musical representations of identity. Gender identities, for instance, have been delineated in many different ways in music through gendered participation in different musical practices – for example, in Euro- 4 Moore 2012, 178; see also Frith 1998; Auslander 2009. 5 Cusick 1999. 6 McClary 2002; Weheliye 2002. 7 Young 2015.
zurück zum  Buch JRFM - Journal Religion Film Media, Band 02/01"
JRFM Journal Religion Film Media, Band 02/01