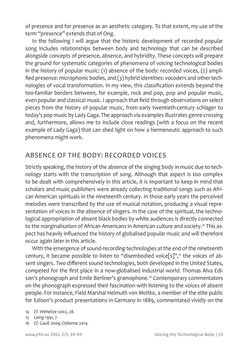 Voicing the Technological Body | 53www.jrfm.eu 2016, 2/1, 49–69 of presence and for presence as an aesthetic category. To that extent, my use of the term “presence” extends that of Ong. In the following I will argue that the historic development of recorded popular song includes relationships between body and technology that can be described alongside concepts of presence, absence, and hybridity. These concepts will prepare the ground for systematic categories of phenomena of voicing technological bodies in the history of popular music: (1) absence of the body: recorded voices, (2) ampli- fied presence: microphonic bodies, and (3) hybrid identities: vocoders and other tech- nologies of vocal transformation. In my view, this classification extends beyond the too-familiar borders between, for example, rock and pop, pop and popular music, even popular and classical music. I approach that field through observations on select pieces from the history of popular music, from early twentieth-century schlager to today’s pop music by Lady Gaga. The approach via examples illustrates genre-crossing and, furthermore, allows me to include close readings (with a focus on the recent example of Lady Gaga) that can shed light on how a hermeneutic approach to such phenomena might work. ABSENCE OF THE BODY: RECORDED VOICES Strictly speaking, the history of the absence of the singing body in music due to tech- nology starts with the transcription of song. Although that aspect is too complex to be dealt with comprehensively in this article, it is important to keep in mind that scholars and music publishers were already collecting traditional songs such as Afri- can American spirituals in the nineteenth century. In those early years the perceived melodies were transcribed by the use of musical notation, producing a visual repre- sentation of voices in the absence of singers. In the case of the spiritual, the techno- logical appropriation of absent black bodies by white audiences is directly connected to the marginalisation of African Americans in American culture and society.14 This as- pect has heavily influenced the history of globalised popular music and will therefore occur again later in this article. With the emergence of sound-recording technologies at the end of the nineteenth century, it became possible to listen to “disembodied voice[s]”,15 the voices of ab- sent singers. Two different sound technologies, both developed in the United States, competed for the first place in a now-globalised industrial world: Thomas Alva Edi- son’s phonograph and Emile Berliner’s gramophone.16 Contemporary commentators on the phonograph expressed their fascination with listening to the voices of absent people. For instance, Field Marshal Helmuth von Moltke, a member of the elite public for Edison’s product presentations in Germany in 1889, commentated vividly on the 14 Cf. Weheliye 2002, 28. 15 Laing 1991, 7. 16 Cf. Gauß 2009; Osborne 2014.
zurück zum  Buch JRFM - Journal Religion Film Media, Band 02/01"
JRFM Journal Religion Film Media, Band 02/01