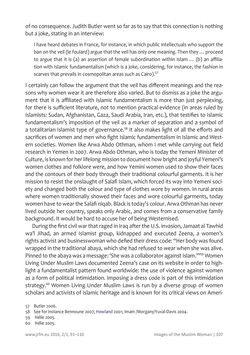 Images of the Muslim Woman | 107www.jrfm.eu 2016, 2/1, 91–110 of no consequence. Judith Butler went so far as to say that this connection is nothing but a joke, stating in an interview: I have heard debates in France, for instance, in which public intellectuals who support the ban on the veil (le foulard) argue that the veil has only one meaning. Then they … proceed to argue that it is (a) an assertion of female subordination within Islam … (b) an affilia- tion with Islamic fundamentalism (which is a joke, considering, for instance, the fashion in scarves that prevails in cosmopolitan areas such as Cairo).57 I certainly can follow the argument that the veil has different meanings and the rea- sons why women wear it are therefore also varied. But to dismiss as a joke the argu- ment that it is affiliated with Islamic fundamentalism is more than just perplexing, for there is sufficient literature, not to mention practical evidence (in areas ruled by Islamists: Sudan, Afghanistan, Gaza, Saudi Arabia, Iran, etc.), that testifies to Islamic fundamentalism’s imposition of the veil as a marker of separation and a symbol of a totalitarian Islamist type of governance.58 It also makes light of all the efforts and sacrifices of women and men who fight Islamic fundamentalism in Islamic and West- ern societies. Women like Arwa Abdo Othman, whom I met while carrying out field research in Yemen in 2007. Arwa Abdo Othman, who is today the Yemeni Minister of Culture, is known for her lifelong mission to document how bright and joyful Yemeni’s women clothes and folklore were, and how Yemini women used to show their faces and the contours of their body through their traditional colourful garments. It is her mission to resist the onslaught of Salafi Islam, which forced its way into Yemeni soci- ety and changed both the colour and type of clothes wore by women. In rural areas where women traditionally showed their faces and wore colourful garments, today women have to wear the Salafi niqab. Black is today’s colour. Arwa Othman has never lived outside her country, speaks only Arabic, and comes from a conservative family background. It would be hard to accuse her of being Westernised. During the first civil war that raged in Iraq after the U.S. invasion, Jamaat al Tawhid wa’l Jihad, an armed Islamist group, kidnapped and executed Zeena, a women’s rights activist and businesswoman who defied their dress code: “Her body was found wrapped in the traditional abaya, which she had refused to wear when she was alive. Pinned to the abaya was a message: ‘She was a collaborator against Islam.’”59 Women Living Under Muslim Laws documented Zeena’s case on its website in order to high- light a fundamentalist pattern found worldwide: the use of violence against women as a form of political intimidation. Imposing a dress code is part of this intimidation strategy.60 Women Living Under Muslim Laws is run by a diverse group of women scholars and activists of Islamic heritage and is known for its critical views on Ameri- 57 Butler 2006. 58 See for instance Bennoune 2007; Howland 2001; Imam /Morgany/Yuval-Davis 2004. 59 Hélie 2005. 60 Hélie 2005.
zurück zum  Buch JRFM - Journal Religion Film Media, Band 02/01"
JRFM Journal Religion Film Media, Band 02/01