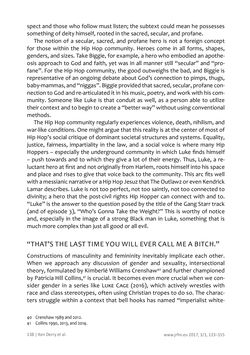 138 | Ken Derry et al. www.jrfm.eu 2017, 3/1, 123–155 spect and those who follow must listen; the subtext could mean he possesses something of deity himself, rooted in the sacred, secular, and profane. the notion of a secular, sacred, and profane hero is not a foreign concept for those within the hip hop community. heroes come in all forms, shapes, genders, and sizes. take Biggie, for example, a hero who embodied an apothe- osis approach to God and faith, yet was in all manner still “secular” and “pro- fane”. for the hip hop community, the good outweighs the bad, and Biggie is representative of an ongoing debate about God’s connection to pimps, thugs, baby-mammas, and “niggas”. Biggie provided that sacred, secular, profane con- nection to God and re-articulated it in his music, poetry, and work with his com- munity. someone like Luke is that conduit as well, as a person able to utilize their context and to begin to create a “better way” without using conventional methods. the hip hop community regularly experiences violence, death, nihilism, and war-like conditions. One might argue that this reality is at the center of most of hip hop’s social critique of dominant societal structures and systems. equality, justice, fairness, impartiality in the law, and a social voice is where many Hip Hoppers – especially the underground community in which Luke finds himself – push towards and to which they give a lot of their energy. thus, Luke, a re- luctant hero at first and not originally from Harlem, roots himself into his space and place and rises to give that voice back to the community. This arc fits well with a messianic narrative or a hip hop Jesuz that the Outlawz or even Kendrick Lamar describes. Luke is not too perfect, not too saintly, not too connected to divinity; a hero that the post-civil rights Hip Hopper can connect with and to. “Luke” is the answer to the question posed by the title of the Gang starr track (and of episode 3), “Who’s Gonna take the Weight?” this is worthy of notice and, especially in the image of a strong Black man in Luke, something that is much more complex than just all good or all evil. “thAt’s the LAst tiMe yOU WiLL eVer CALL Me A BitCh.” Constructions of masculinity and femininity inevitably implicate each other. When we approach any discussion of gender and sexuality, intersectional theory, formulated by Kimberlé Williams Crenshaw40 and further championed by Patricia hill Collins,41 is crucial. it becomes even more crucial when we con- sider gender in a series like Luke Cage (2016), which actively wrestles with race and class stereotypes, often using Christian tropes to do so. the charac- ters struggle within a context that bell hooks has named “imperialist white- 40 Crenshaw 1989 and 2012. 41 Collins 1990, 2013, and 2014.
zurück zum  Buch JRFM - Journal Religion Film Media, Band 03/01"
JRFM Journal Religion Film Media, Band 03/01