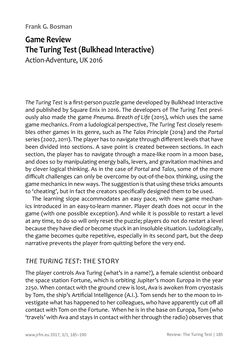 Review: The Turing Test | 185www.jrfm.eu 2017, 3/1, 185–190 Frank G. Bosman Game Review The Turing Test (Bulkhead Interactive) Action-Adventure, UK 2016 The Turing Test is a first-person puzzle game developed by Bulkhead Interactive and published by square enix in 2016. the developers of The Turing Test previ- ously also made the game Pneuma. Breath of Life (2015), which uses the same game mechanics. from a ludological perspective, The Turing Test closely resem- bles other games in its genre, such as The Talos Principle (2014) and the Portal series (2007, 2011). The player has to navigate through different levels that have been divided into sections. A save point is created between sections. in each section, the player has to navigate through a maze-like room in a moon base, and does so by manipulating energy balls, levers, and gravitation machines and by clever logical thinking. As in the case of Portal and Talos, some of the more difficult challenges can only be overcome by out-of-the-box thinking, using the game mechanics in new ways. the suggestion is that using these tricks amounts to ‘cheating’, but in fact the creators specifically designed them to be used. the learning slope accommodates an easy pace, with new game mechan- ics introduced in an easy-to-learn manner. Player death does not occur in the game (with one possible exception). And while it is possible to restart a level at any time, to do so will only reset the puzzle; players do not do restart a level because they have died or become stuck in an insoluble situation. Ludologically, the game becomes quite repetitive, especially in its second part, but the deep narrative prevents the player from quitting before the very end. THE TuRING TEST: the stOry the player controls Ava turing (what’s in a name?), a female scientist onboard the space station fortune, which is orbiting Jupiter’s moon europa in the year 2250. When contact with the ground crew is lost, Ava is awoken from cryostasis by Tom, the ship’s Artificial Intelligence (A.I.). Tom sends her to the moon to in- vestigate what has happened to her colleagues, who have apparently cut off all contact with tom on the fortune. When he is in the base on europa, tom (who ‘travels’ with Ava and stays in contact with her through the radio) observes that
zurück zum  Buch JRFM - Journal Religion Film Media, Band 03/01"
JRFM Journal Religion Film Media, Band 03/01