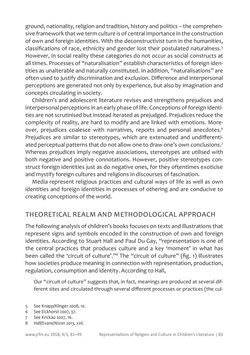 Representations of Religion and Culture in Children’s Literature | 83www.jrfm.eu 2018, 4/1, 81–99 ground, nationality, religion and tradition, history and politics – the comprehen- sive framework that we term culture is of central importance in the construction of own and foreign identities. With the deconstructivist turn in the humanities, classifications of race, ethnicity and gender lost their postulated naturalness.5 However, in social reality these categories do not occur as social constructs at all times. Processes of “naturalisation” establish characteristics of foreign iden- tities as unalterable and naturally constituted. In addition, “naturalisations” are often used to justify discrimination and exclusion. Difference and interpersonal perceptions are generated not only by experience, but also by imagination and concepts circulating in society. Children’s and adolescent literature revises and strengthens prejudices and interpersonal perceptions in an early phase of life. Conceptions of foreign identi- ties are not scrutinised but instead iterated as prejudged. Prejudices reduce the complexity of reality, are hard to modify and are linked with emotions. More- over, prejudices coalesce with narratives, reports and personal anecdotes.6 Prejudices are similar to stereotypes, which are extenuated and undifferenti- ated perceptual patterns that do not allow one to draw one’s own conclusions.7 Whereas prejudices imply negative associations, stereotypes are utilised with both negative and positive connotations. However, positive stereotypes con- struct foreign identities just as do negative ones, for they oftentimes exoticise and mystify foreign cultures and religions in discourses of fascination. Media represent religious practices and cultural ways of life as well as own identities and foreign identities in processes of othering and are conducive to creating conceptions of the world. THEORETICAL REALM AND METHODOLOGICAL APPROACH The following analysis of children’s books focuses on texts and illustrations that represent signs and symbols encoded in the construction of own and foreign identities. According to Stuart Hall and Paul Du Gay, “representation is one of the central practices that produces culture and a key ‘moment’ in what has been called the ‘circuit of culture’.”8 The “circuit of culture” (fig. 1) illustrates how societies produce meaning in connection with representation, production, regulation, consumption and identity. According to Hall, Our “circuit of culture” suggests that, in fact, meanings are produced at several dif- ferent sites and circulated through several different processes or practices (the cul- 5 See Knapp/Klinger 2008, 10. 6 See Eickhorst 2007, 37. 7 See Krickau 2007, 16. 8 Hall/Evans/Nixon 2013, xvii.
zurück zum  Buch JRFM - Journal Religion Film Media, Band 04/01"
JRFM Journal Religion Film Media, Band 04/01