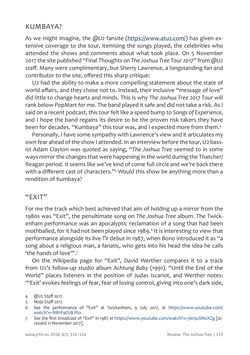 Review: The Joshua Tree | 113www.jrfm.eu 2018, 4/1, 111–116 KUMBAYA? As we might imagine, the @U2 fansite (https://www.atu2.com/) has given ex- tensive coverage to the tour, itemising the songs played, the celebrities who attended the shows and comments about what took place. On 5 November 2017 the site published “Final Thoughts on The Joshua Tree Tour 2017” from @U2 staff. Many were complimentary, but Sherry Lawrence, a longstanding fan and contributor to the site, offered this sharp critique: U2 had the ability to make a more compelling statement about the state of world affairs, and they chose not to. Instead, their inclusive “message of love” did little to change hearts and minds. This is why The Joshua Tree 2017 Tour will rank below PopMart for me. The band played it safe and did not take a risk. As I said on a recent podcast, this tour felt like a speed bump to Songs of Experience, and I hope the band regains its desire to be the proven risk takers they have been for decades. “Kumbaya” this tour was, and I expected more from them.4 Personally, I have some sympathy with Lawrence’s view and it articulates my own fear ahead of the show I attended. In an interview before the tour, U2 bass- ist Adam Clayton was quoted as saying, “The Joshua Tree seemed to in some ways mirror the changes that were happening in the world during the Thatcher/ Reagan period. It seems like we’ve kind of come full circle and we’re back there with a different cast of characters.”5 Would this show be anything more than a rendition of Kumbaya? “EXIT” For me the track which best achieved that aim of holding up a mirror from the 1980s was “Exit”, the penultimate song on The Joshua Tree album. The Twick- enham performance was an apocalyptic reclamation of a song that had been mothballed, for it had not been played since 1989.6 It is interesting to view that performance alongside its live-TV debut in 1987, when Bono introduced it as “a song about a religious man, a fanatic, who gets into his head the idea he calls ‘the hands of love’”.7 On the Wikipedia page for “Exit”, David Werther compares it to a track from U2’s follow-up studio album Achtung Baby (1991). “Until the End of the World” places listeners in the position of Judas Iscariot, and Werther notes: “‘Exit’ evokes feelings of fear, fear of losing control, giving into one’s dark side, 4 @U2 Staff 2017. 5 Mojo Staff 2017. 6 See the performance of “Exit” at Twickenham, 9 July 2017, at https://www.youtube.com/ watch?v=NB1E9OJ8JRo. 7 See the first broadcast of “Exit” in 1987 at https://www.youtube.com/watch?v=3kI9uSNoXZg [ac- cessed 21 November 2017].
zurück zum  Buch JRFM - Journal Religion Film Media, Band 04/01"
JRFM Journal Religion Film Media, Band 04/01