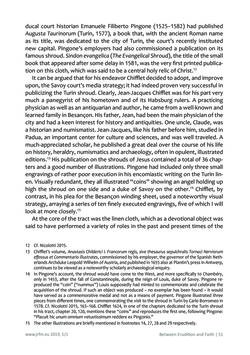 ducal court historian Emanuele Filiberto Pingone (1525–1582) had published Augusta Taurinorum (Turin, 1577), a book that, with the ancient Roman name as its title, was dedicated to the city of Turin, the court’s recently instituted new capital. Pingone’s employers had also commissioned a publication on its famous shroud. Sindon evangelica (The Evangelical Shroud), the title of the small book that appeared after some delay in 1581, was the very first printed publica- tion on this cloth, which was said to be a central holy relic of Christ.12 It can be argued that for his endeavor Chifflet decided to adopt, and improve upon, the Savoy court’s media strategy; it had indeed proven very successful in publicizing the Turin shroud. Clearly, Jean-Jacques Chifflet was for his part very much a panegyrist of his hometown and of its Habsburg rulers. A practicing physician as well as an antiquarian and author, he came from a well-known and learned family in Besançon. His father, Jean, had been the main physician of the city and had a keen interest for history and antiquities. One uncle, Claude, was a historian and numismatist. Jean-Jacques, like his father before him, studied in Padua, an important center for culture and sciences, and was well traveled. A much-appreciated scholar, he published a great deal over the course of his life on history, heraldry, numismatics and archaeology, often in opulent, illustrated editions.13 His publication on the shrouds of Jesus contained a total of 36 chap- ters and a good number of illustrations. Pingone had included only three small engravings of rather poor execution in his encomiastic writing on the Turin lin- en. Visually redundant, they all illustrated “coins” showing an angel holding up high the shroud on one side and a duke of Savoy on the other.14 Chifflet, by contrast, in his plea for the Besançon winding sheet, used a noteworthy visual strategy, arraying a series of ten finely executed engravings, five of which I will look at more closely.15 At the core of the tract was the linen cloth, which as a devotional object was said to have performed a variety of roles in the past and present times of the 12 Cf. Nicolotti 2015. 13 Chifflet’s volume, Anastasis Childerici I. Francorum regis, sive thesaurus sepulchralis Tornaci Nerviorum effossus et Commentario illustrates, commissioned by his employer, the governor of the Spanish Neth- erlands Archduke Leopold Wilhelm of Austria, and published in 1655 also at Plantin’s press in Antwerp, continues to be viewed as a noteworthy scholarly archaeological enquiry. 14 In Pingone’s account, the shroud would have come to the West, and more specifically to Chambéry, only in 1453, after the fall of Constantinople, during the reign of Louis, duke of Savoy. Pingone re- produced the “coin” (“nummus”) Louis supposedly had minted to commemorate and celebrate the acquisition of the shroud. If such an object was produced – no exemplar has been found – it would have served as a commemorative medal and not as a means of payment. Pingone illustrated three pieces from different times, one commemorating the visit to the shroud in Turin by Carlo Borromeo in 1578. Cf. Nicolotti 2015, 163–168. Chifflet 1624, in one of the chapters dedicated to the Turin shroud in his tract, chapter 20, 120, mentions these “coins” and reproduces the first one, following Pingone: “Placuit hic unum omnium vetustissimum reddere ex Pingonio.” 15 The other illustrations are briefly mentioned in footnotes 14, 27, 28 and 29 respectively. Between Erudition and Faith | 51www.jrfm.eu 2019, 5/1
zurück zum  Buch JRFM - Journal Religion Film Media, Band 05/01"
JRFM Journal Religion Film Media, Band 05/01