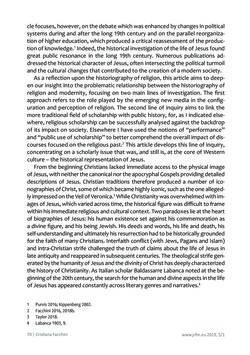 cle focuses, however, on the debate which was enhanced by changes in political systems during and after the long 19th century and on the parallel reorganiza- tion of higher education, which produced a critical reassessment of the produc- tion of knowledge.1 Indeed, the historical investigation of the life of Jesus found great public resonance in the long 19th century. Numerous publications ad- dressed the historical character of Jesus, often intersecting the political turmoil and the cultural changes that contributed to the creation of a modern society. As a reflection upon the historiography of religion, this article aims to deep- en our insight into the problematic relationship between the historiography of religion and modernity, focusing on two main lines of investigation. The first approach refers to the role played by the emerging new media in the config- uration and perception of religion. The second line of inquiry aims to link the more traditional field of scholarship with public history, for, as I indicated else- where, religious scholarship can be successfully analysed against the backdrop of its impact on society. Elsewhere I have used the notions of “performance” and “public use of scholarship” to better comprehend the overall impact of dis- courses focused on the religious past.2 This article develops this line of inquiry, concentrating on a scholarly issue that was, and still is, at the core of Western culture – the historical representation of Jesus. From the beginning Christians lacked immediate access to the physical image of Jesus, with neither the canonical nor the apocryphal Gospels providing detailed descriptions of Jesus. Christian traditions therefore produced a number of ico- nographies of Christ, some of which became highly iconic, such as the one alleged- ly impressed on the Veil of Veronica.3 While Christianity was overwhelmed with im- ages of Jesus, which varied across time, the historical figure was difficult to frame within his immediate religious and cultural context. Two paradoxes lie at the heart of biographies of Jesus: his human existence set against his commemoration as a divine figure, and his being Jewish. His deeds and words, his life and death, his self-understanding and ultimately his resurrection had to be historically grounded for the faith of many Christians. Interfaith conflict (with Jews, Pagans and Islam) and intra-Christian strife challenged the truth of claims about the life of Jesus in late antiquity and reappeared in subsequent centuries. The theological strife gen- erated by the humanity of Jesus and the divinity of Christ has deeply characterized the history of Christianity. As Italian scholar Baldassarre Labanca noted at the be- ginning of the 20th century, the search for the human and divine aspects in the life of Jesus has appeared constantly across literary genres and narratives.4 1 Purvis 2016; Kippenberg 2002. 2 Facchini 2016, 2018b. 3 Taylor 2018. 4 Labanca 1903, 9. 70 | Cristiana Facchini www.jrfm.eu 2019, 5/1
zurück zum  Buch JRFM - Journal Religion Film Media, Band 05/01"
JRFM Journal Religion Film Media, Band 05/01