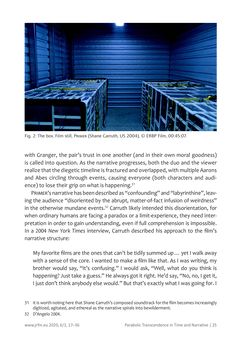 with Granger, the pair’s trust in one another (and in their own moral goodness) is called into question. As the narrative progresses, both the duo and the viewer realize that the diegetic timeline is fractured and overlapped, with multiple Aarons and Abes circling through events, causing everyone (both characters and audi- ence) to lose their grip on what is happening.31 Primer’s narrative has been described as “confounding” and “labyrinthine”, leav- ing the audience “disoriented by the abrupt, matter-of-fact infusion of weirdness” in the otherwise mundane events.32 Carruth likely intended this disorientation, for when ordinary humans are facing a paradox or a limit-experience, they need inter- pretation in order to gain understanding, even if full comprehension is impossible. In a 2004 New York Times interview, Carruth described his approach to the film’s narrative structure: My favorite films are the ones that can’t be tidily summed up … yet I walk away with a sense of the core. I wanted to make a film like that. As I was writing, my brother would say, “It’s confusing.” I would ask, “Well, what do you think is happening? Just take a guess.” He always got it right. He’d say, “No, no, I get it, I just don’t think anybody else would.” But that’s exactly what I was going for. I 31 It is worth noting here that Shane Carruth’s composed soundtrack for the film becomes increasingly digitized, agitated, and ethereal as the narrative spirals into bewilderment. 32 D’Angelo 2004. Fig. 2: The box. Film still, Primer (Shane Carruth, US 2004), © ERBP Film, 00:45:07. Parabolic Transcendence in Time and Narrative | 25www.jrfm.eu 2020, 6/1, 17–36
zurück zum  Buch JRFM - Journal Religion Film Media, Band 06/01"
JRFM Journal Religion Film Media, Band 06/01